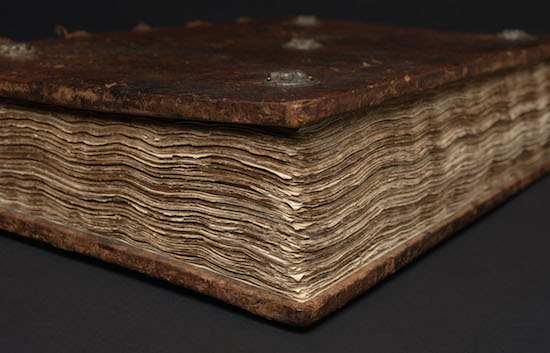 In an age of mass production, traces of the handmade take on far greater significance than they held when they were the norm. There’s nothing obviously lovable about the deckle edge, the fuzzy, irregular margin characteristic of handmade paper. In a bound volume, authentic deckle edges (more on that in a moment) usually signal an owner too penurious or too indifferent to complete the process of acquiring a book — until the mid-19th century this usually meant both purchasing it from a bookseller and taking it to a bookbinder, where these wavy, messy leaves would be made neat and square.

As the practice of bespoke binding was supplanted by cheaper edition binding, supplied by the publisher and the same on every copy, so too did machine-made paper, trimmed to whatever size was required, eliminate the deckle edge. This clear improvement in efficiency and functionality was met almost immediately with nostalgia for the vanished deckle, like music buffs praising the warmth of vinyl as they abjured the CD. Machining reintroduced a skeuomorphic deckle edge to new books — if you buy a book today with a ridged foredge, you’re seeing a remarkably durable allusion to a style that’s been obsolete for about 150 years. As well, collectors paid a high premium for its genuine presence in older books. In his bibliophilic Bible ABC for Book Collectors, John Carter refers disdainfully to “Deckle-Fetishism, the overzealous, undiscriminating (and often very expensive) passion for uncut edges in books which were intended to have their edges cut.”

While I don’t think my enthusiasm for deckle edges rises to the level of a paraphilia, I like deckle edges for precisely the reason Carter identifies. Every librarian prizes signs of use in books; knowing who owned a book, and especially how they reacted to the experience of reading it, are among the most important reasons we acquire and preserve books. But there is something magical too about holding an object that has survived two or three centuries in essentially the same condition as it was first created. It feels a little bit like time travel.

See All Posts by John Overholt

John Overholt is the Curator of the Donald and Mary Hyde Collection of Samuel Johnson, and of Early Modern Books and Manuscripts at Houghton Library, Harvard University. Follow him on Twitter.