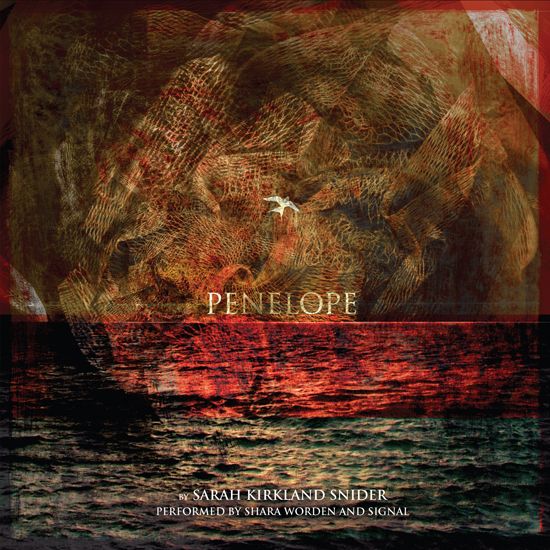 “Home is where I’m going, but never coming” — the unattainability of conclusions, and perhaps the undesirability of endings, is a theme central to the American psyche, this nation of travelers and the discontent. Moby-Dick keeps to the eternally potential void of the sea (and if “Ishmael” is still alive on solid land, we can tell he’s left home behind for good); Gatsby speaks of the impossibility of possession once wanting gives you up, specifically symbolized with the moment the inhabiting of the Americas went wrong (that is, upon humans’ arrival).

My wife and I were driving back through the ignited jewels of a misted mountain afternoon, returning from our last Canadian 4th of July (we knew when home was prime for leaving), as the lines that open this article were playing on the deck — Sarah Kirkland Snider’s song-cycle Penelope (2010; composed by Snider, lyrics by Ellen McLaughlin, performed by Shara Worden and Signal), an edge-classical drama based in ancient Greek tragedy and the ongoing sorrow of Western existence. Evoking the return of Odysseus, but not as the man he was or to the home he knew or the spouse who thought she knew him, Penelope takes place in some imagined present, the husband returning after twenty years from an unnamed war with no memory of who he was, but a remaining territorial conception of what is “his.”

“The world wants her travelers to stay lost,” sings Worden, and the title character was given a world — of self-determination, of identity — that she would be happy to stay in; the man’s return takes this world away without her going anywhere. My wife and I took each other almost everywhere, and changed worlds for wherever we were. Snider’s melancholy, intimately momentous score stirs like the sea, and its slowly recurring figures are oceanic in their sensation and sweep. The currents of Penelope’s life have washed up regrets and dissatisfactions she had with the man even as he had been; the lengthening days erode both her security and her resistance to remaking a life with him.

I saw my wife to the shore of eternity on July 9, 2015, two years after we listened to these songs. We reached each other long before, and went together to the edge of the endless; I feel its waves still, as she gets further to the center of the rings that widen out to me.

The hero here is not the man who returned but the woman who left. My earliest memories are of heroines — Guinevere going to the stake in the Camelot original-cast album my parents would always play; Persephone stolen to hell in winter and holding fast the power of spring. My mom carried me out of the dark of nonexistence and through my early life; my first hero, who left for her own darkness two months after my wife. She had packed up to California from Chicago in her college years, and ventured on a trip alone to the segregated South in that same time. She drank from the “Colored” water-fountains and brought back indelible stories of why the fight for civil rights was right; she didn’t go on a freedom ride, she was more like a tourist to the tragedy, but she could always be counted on to edit nothing from the slideshow — like when she and my dad sat my sister and me down for Holocaust documentaries early in our lives; they taught us how we lucky survivors were meant to meet the dispossessed more than halfway.

Mom’s California experience exposed her to Latin culture earlier than many in our suburban universe; my wife and I were crossing back and forth from the West once while we listened to Ry Cooder, et al.’s Chávez Ravine (2005), the other novel-for-disk most meaningful to me. It takes place in the postwar LA of my mom, and the places in it even she had a phobia of going. A brilliant transmission plucked from some supernatural radio-waves traveling slow since the last midcentury, Chávez Ravine mixes Latin pop of the period with imagined soliloquies from mad Anglo developers, conflicted African-American demolition contractors, and doomed Spanish-speaking citizens as dirty deals and racist policies spell the end of the Mexican-American neighborhood named in the title, razed to build a housing project that never materialized while LA Dodger Stadium did. The stylish “Pachuco” subculture, branded of course as a criminal uprising, is vividly brought to life, and two of the period’s musical masters, Don Tosti and Lalo Guerrero, were still alive to sing on this album. It’s the main reason I was inspired to make the good-hearted demon Hotspot in my and Paolo Leandri’s comic Nightworld a zoot-suit kid in his long-ago life.

The album begins with space-aliens and ends with nature deities; my wife and I played this music as we drove around in dark wastelands, at the feet of shadow mountains, guided by starry satellites. “Just a place you don’t know, up a road you can’t go,” sings Bla Pahinui toward the end, and I’m happy to have had these journeys, my heroines by my side and the voices we only ever heard as echoes brought back to brief life, headed for places that are not in this world, and in that way, on a trip that never has to end.