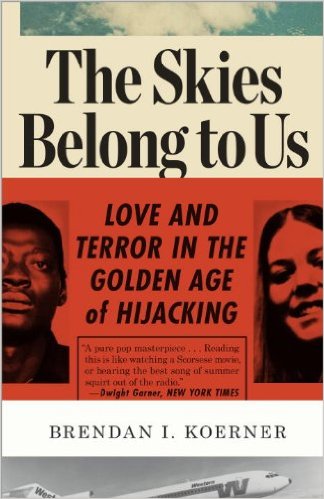 Brendan I. Koerner’s The Skies Belong to Us (2014) is a can’t-stop-reading account of recent American history as told through a series of hijackings. The book details numerous cases, consistently returning to the tale of Roger Holder and Cathy Kerkow — who commandeered a plane from Los Angeles to Algeria, the longest distance a hijacked plane has ever traveled. Holder was a Vietnam vet who, like many other Americans, had become deeply disillusioned and was searching for a way to protest.

During the early days of the hijacking epidemic, the destination was always Cuba. The stops were so frequent, and the airlines so resistant to implementing any security measures, that all pilots were instructed on how to land at José Martí International Airport regardless of where their flight was headed. The whole country was watching the drama that was unfolding in the skies. In many cases, people were rooting for this new brand of bandit. The long unfolding saga had everything: heroes, villains, humor, sorrow, politics, war, protest, race, and no shortage of public figures — including Angela Davis, whose release from prison was the original demand made by Roger Holder.

As hijackers became bolder and more violent, their goals and destinations more disparate, it became increasingly difficult to dismiss the phenomenon as mostly harmless and often entertaining. They became aware that they could use airplanes as weapons rather than merely as a means of reaching their destination. People were being shot and injured. Supporters of these outlaws of the skies were turning against them.

There is no account of 9/11 in the book but for readers it casts the dark shadow of hindsight. Referring to Cathy Kerkow at the end of the book, Koerner writes, “…however much we might wish to sever ourselves from the past, ties of blood and memory remain.”