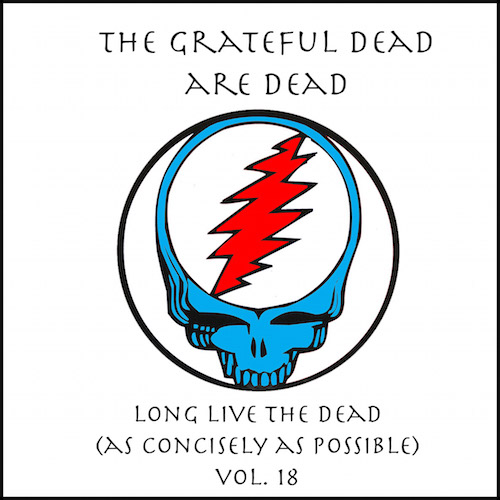 Jerry Garcia died 21 years ago, and The Grateful Dead’s never ending tour transmigrated from a stage near you to a never ending series of releases from a tape vault in California. So well did the Grateful Dead document their live performances that you can now replay nearly the whole, long strange trip in real time. There are thousands of shows recorded end-to-end, or nearly so, in stereo, right off the concert mixing board.

In a nearby parallel universe, the last 21 years are full of official Grateful Dead live albums that cull, curate, concentrate, contextualize, decontextualize, and re-contextualize what was sitting in that tape vault when Jerry died.

In that universe there’s the posthumous release that topped a lot of jazz polls, cementing the Dead’s legacy as one of the greatest improvisational jazz-rock-fusion collectives.

There’s the live album organized around Garcia’s flood years as a songwriter, accompanied ably and subtly by the Dead of the same period, cementing that oeuvre as a monument in American songwriting.

There’s the album that’s nothing but a two-hour “Dark Star” montage, with no episodes you might view as bathroom break opportunities. You’d rather stand there and listen and pee your pants.

There would be single-show releases that winnow out all the screwed up or merely fine material to turn three- or four-hour shows into tight one- or two-hour live albums.

There would be cases in which The Dead decided to make some radical edits, in order to release the angels trapped in the blocks of marble. An instrumental “Eyes of the World?” Why not? Frank Zappa or Miles Davis wouldn’t have thought twice.

In this parallel universe there would be no telling how the next release might be organized into another distinctive perspective on The Dead’s accomplishment. But one thing is likely; that accomplishment would be more legible than it is in our universe.

In our universe, The Dead decided to release the tape vault almost exclusively in the form of complete concerts. Is it a crime or a blessing that these releases almost all go out of print immediately? Yes.

With each of them, you are once again put in the position of a Deadhead tasked with judging the contents of another three-to-four-hour historical document, unfolding in real time, which will be, in many respects, very similar to many other such documents that you have heard. They are archival, but they are not albums. They don’t help you see through the forest to the most majestic trees. The songs are never going to be stacked into surprising sequences that form new neural pathways. They’re not meant to be played for people outside the circle, who don’t already know which allowances they’re supposed to make. In somewhat lower fidelity, they are probably already available for streaming on archive.org.

So, for those of us who love The Dead, but who don’t have enough patience or life-span left to listen to the less-than-excellent stuff for any longer that it takes to realize that it is less than excellent – but who hunger for fresh batches of material to get to know intimately through repeated, thrilled listens – it’s a DIY world, in which you try to approximate albums that might have been released in a parallel universe.

It should be noted that there are some curated live albums that stay in print that are well worth your money: