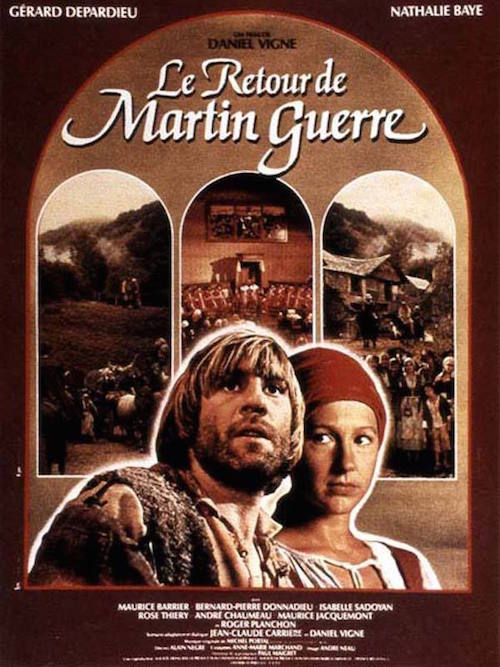 The Return of Martin Guerre (1982), directed by Daniel Vigne.

In the 16th century nobody was taking selfies. Try to imagine this absence of literal self-reflection in daily life. Try to imagine your memory unaided by photographs. Then imagine not seeing someone for eight years. Eight years where both you and they changed and grew and experienced many things. Would you recognize them when they returned?

Based on a true story, The Return of Martin Guerre opens in Artigat, France in 1549. A young couple is to be married. The marriage between Martin Guerre (Bernard-Pierre Donnadieu) and Bertrande de Rols (Nathalie Baye) is not a love match. Martin is cold, critical, a poor worker, uninterested in his bride and unable to consummate their marriage. They do eventually have a son who Martin takes no interest in. One day he leaves Artigat. Years pass. The film cuts back and forth in time from those early years to the interrogation of Bertrande. After eight years a man (Gérard Depardieu at his best) comes to Artigat claiming to be Martin. The villagers are easily convinced of his identity.

Through the detailed account written by Jean de Coras, the parliamentary counselor on the case, The Return of Martin Guerre offers us a rare look at what life was like in a 16th Century French village. Attention to detail is apparent in all aspects of the filmmaking. André Neau’s cinematic work, which evokes the paintings of Bruegel, is especially noteworthy.

This newly returned Martin is charismatic, gregarious, a loving father, and a strong worker. What if the man who returns is everything the man who left was not? When he comes face to face with his wife, he looks at her with pleased astonishment, “My God, my wife is beautiful.” The marital bed proves to be a much improved experience. They have a daughter together. He teaches Bertrande to write her own name. They are happy.

Then things begin to unravel. A vagrant claims he knows that Martin Guerre lost a leg while serving in the army. Doubt begins to spread. Martin is charged as an imposter. He is cleared but the next morning he is arrested. This time the accusation comes with signatures including an X that is said to be the mark of his own wife. A second trial begins.

Bertrande proves the X is not her signature, as she knows how to sign her own name. It is decided that this man is in fact Martin Guerre. But just as this verdict is about to be delivered a man shows up in court. We see and hear his wooden leg, tap tap tap, before we see him. Now there are two Martin Guerres. Which one is real? Slowly people turn on the man they were just about to clear. He knows too much. He must be a devil. As he gets increasingly distressed, the man we want to be Martin Guerre contradicts himself on a detail, sealing his own fate.

The young son runs to Depardieu, “He is my father!” the boy rightly exclaims. Bertrande, however, in order to protect her children from losing both parents, identifies the other man as the real Martin Guerre.

Finally, the imposter tells his story. His name is Pansette. He served with Martin Guerre in the army. Martin told him about the wife and son he left behind. He swore he would never return. So, bearing some physical resemblance, Pansette decided to replace him. He says he almost told the truth on that first day, until he saw his wife. He addresses Martin directly, “You don’t deserve her. I know her better than you.” These are the two truest statements that he has uttered.

Pansette is hanged. Bertrande is asked after the hanging whether she had known. Yes, she had. But Pansette was her true husband. This she also knows.

The rule of law prevails but justice does not.