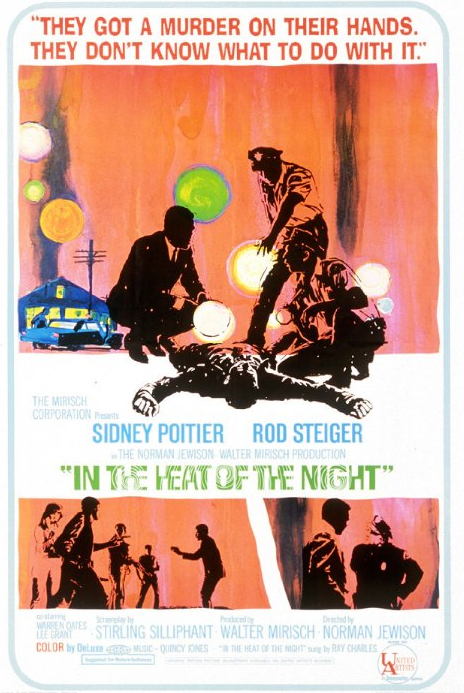 In the Heat of the Night (1967), directed by Norman Jewison.

Almost 50 years ago a film came out starring Sidney Poitier and Rod Steiger set in Mississippi. Directed by Norman Jewison, scored by Quincy Jones, and lensed by the brilliant, recently passed, Haskell Wexler, In The Heat of The Night was controversial in 1967.

Poitier plays Virgil Tibbs, Philadelphia’s best homicide detective who happens to be in Misssissippi when he is arrested on suspicion of murdering a prominent white man. Steiger plays Bill Gillespie, the racist Chief of Police who is forced to work with Poitier to solve the case. Both Steiger and Poitier are excellent, but it’s Poitier who is the heart, soul, and pulse of the entire film. Poitier is able to do what he is always able to do – deliver a performance of such intensity and measured control that he is immediately and consistently the one you watch. Steiger won Best Actor for his performsnce. Poitier was not even nominated.

I wish I could write that a black actor might have a fair shot at an Oscar nomination. Instead, here is a list of unarmed black men who were killed by police last year:

The following is excerpted from Bosley Crowther’s New York Times review of the film, published almost 50 fucking years ago: “The hot surge of racial hate and prejudice that is so evident and critical now in so many places in this country…. In this juxtaposition of resentments between whites and blacks is vividly and forcefully illustrated one of the awful dilemmas of our times.”