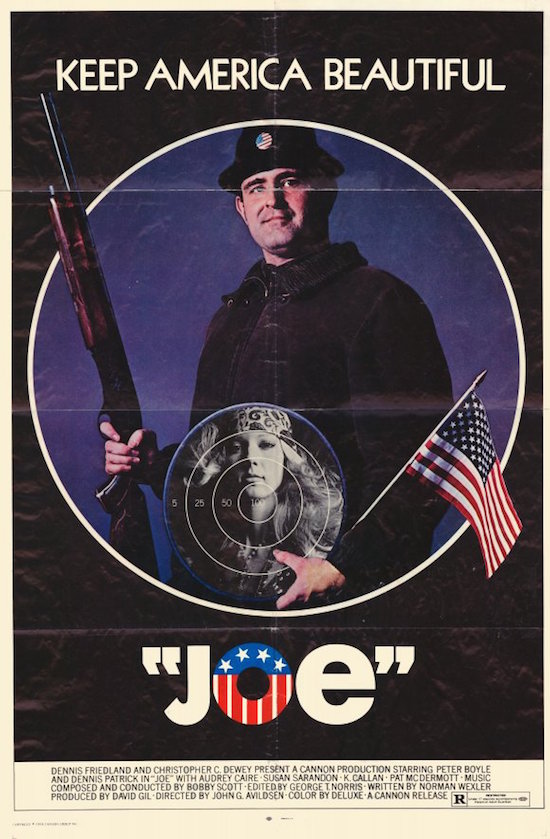 The 1970 film Joe stars Peter Boyle in a performance that embodies a strain of white male hatred and anger that almost 5 decades later is very much on display wherever you look.

Wealthy New York businessman Bill Compton (Dennis Patrick) and his wife Joan (Audrey Claire) learn that their daughter (Susan Sarandon) has overdosed on drugs. After visiting her in the hospital Bill goes to retrieve his daughter’s things and encounters her drug dealer boyfriend. They argue and Bill murders him.

Stopping in a bar to calm his nerves, Bill overhears Joe say: “Hippies, I’d like to kill one of them.”

“I just did,” Bill replies without thinking. He quickly dismisses the comment as a joke and the two men continue to talk, but when Joe sees the murder reported on TV he calls Bill up.

Joe tells Bill, “I could blackmail you.” Which is exactly what Bill fears, but then Joe goes on to say, “I just talk about it, you did it.” A veteran, Joe continues, “In the war when you kill someone you feel bad and you feel good at the same time.”

Joe is a minumum wage factory worker; Bill is an advertising executive. Fueled by the veiled threat of blackmail and grounded in shared hate, a friendship of sorts begins. Joe shows Bill his “well balanced collection” of guns including a submachine gun that he is “not supposed to have.”

Wen Melissa overhears her father talking about the murder, she runs off. Bill and Joe go looking for her. Their search leads them to a commune. A confrontation with the hippies there quickly escalates and Joe and Bill kill them all – Bill murdering his own daughter as she attempts to flee the grounds.

Joe audiences applauded the violence, and Boyle was offered other violent parts. He turned them down.