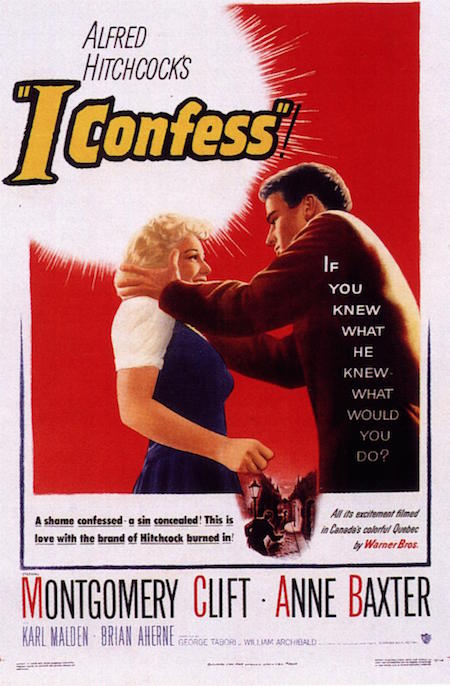 I Confess (1952), directed by Alfred Hitchcock.

Never has menswear been so frightening on-screen as when Hitchcock alarms us with it in I Confess. The film stars Montgomery Clift as Father Logan, a Catholic priest who hears the confession of murder from Otto Keller (O.E. Haas), the sexton at his church. Additionally, Keller confesses, “I wore a cassock to avoid attention.” Soon, Logan himself is charged with the murder by police inspector Larrue (Karl Malden), and he must decide whether revealing what he has heard in confession is worth abandoning the priesthood for. He walks the streets of Quebec, propelled forward by the direction signs. It is during his perambulations that he stops to look at the window display of a men’s clothing store. There, embodied in a plain men’s suit, he sees the future he faces if he speaks.

I Confess is one of Hitchcock’s less admired films and one that he himself disavowed as being heavy-handed. Nevertheless, Clift is remarkable in this role, showing us everything with each micro movement of his face. The film has many scenes that are quintessential Hitchcock — achieving enormous tension despite intentionally light dialogue.

In the book Hitchcock/Truffaut, we learn the following.

TRUFFAUT: “The scene at the breakfast table is especially Hitchcockian. Otto Keller’s wife, serving coffee to all the priests, keeps on passing back and forth behind Montgomery Clift, while she is trying to figure out what he plans to do. The dialogue between the priests is completely innocuous. It’s only through the image that one understands that the essential of the scene is happening between the woman and Montgomery Clift. I don’t know of any other director who can successfully convey that, or who even tries to.”

HITCHCOCK: You mean the sound track says one thing while the image says something else? That’s a fundamental of film direction. Isn’t it exactly the way it is in real life? People don’t always express their inner thoughts to one another; a conversation may be quite trivial, but often the eyes will reveal what a person really thinks or feels.”

Numerous plot coincidences contribute to the growing belief that Logan is guilty. He is tried and acquitted in a court of law, but the court of public opinion awaits him in the form of an angry mob that surrounds him post-verdict. Keller’s wife, Alma, is no longer able to look on silently and pushes through the crowd to tell the police that Logan is innocent. But she is shot and killed by her husband, dying in Logan’s arms.

The police, with Logan in tow, follow Keller into the Chateau Frontenac ballroom — where Inspector Larrue, now guessing that Keller may be the guilty party in the original murder, suggests as much. Keller yells back, “So the priest talked? How kindly he hears my confession — then a little shame, a little violence, that’s all it takes to make him talk.” Of course, Logan has not talked, and faith in him is restored.

Logan walks toward Keller, who is bewildered and confused. Keller asks where his wife is —

Keller raises his gun; the police shoot him. He falls into Logan’s arms and dies.