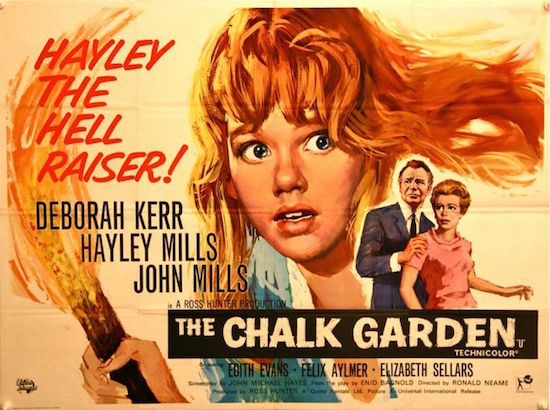 Adapted from a 1955 play of the same title, The Chalk Garden is a crime film that never shows a crime. The film opens when Miss Madrigal (Deborah Kerr) appears at the door of Mrs. St. Maugham’s (Edith Evans) home to apply for the job of governess to her unruly granddaughter, Laurel (Hayley Mills). Laurel has come to live there temporarily while her mother prepares to remarry.

Mrs. St. Maugham lacks a green thumb. She is unable to nurture plants or children. The mysterious Miss Madrigal, who never offers her first name, has a gift for both. “This is a chalk garden. You are trying to grow flowers in chalk,” she explains to her new employer.

Laurel feels abandoned by her mother and acts out accordingly, setting fires and devoting much of her imagination to getting rid of a long line of pre-Madrigal governesses. She is obsessed with true crime stories and in Miss Madrigal finds an especially delicious challenge: a woman who has almost no belongings, no references, no old clothes, no family, practically no indication of a past except for a wooden box containing oil paints. Upon investigation, Laurel discovers the initials C.D.W. on the inside lid of the box. “Exposing you will be the most fun of all. You’re wonderfully odd.” Laurel tells Miss Madrigal.

But when Mrs. St. Maugham invites a friend to dinner, Miss Madrigal’s secret unravels. The dinner guest is the judge who sentenced her to life in prison for the murder of her stepsister. The judge does not recognize her but in the course of dinner conversation, he quotes what she’d said in the courtroom upon hearing her sentence: “What I have been listening to in court is not my life — it is the shape and shadow of my life with the accidents of truth taken out of it.”

When the judge says the name of the girl he was sentencing — Constance Doris Wakeland – Laurel puts the pieces together and suddenly realizes what she has done. It is a depiction of a teenager learning the consequences of her own actions. It is a portrait of damaged people making each other whole again.

“Continue to explore the astonishment of living.”