Some things don’t become particularly interesting until they’ve survived their own era, outlasted the competition; they’re bizarre remnants. In the early ’60s, among the Sunday comic strips abandoned at the local laundromat that I most enjoyed reading were reprints of Gene Ahern’s Our Boarding House (1921–1936) and Room and Board (1936–1953). I found the prehistoric quality of these strips, both of which were set in dumpy boarding houses featuring patched couches and worn-out lamps, and a cast of layabouts who looked like beaten boxers with misshapen noses, very compelling.

Major Hoople and his wife, proprietors of the boarding house in Our Boarding House, were grotesques. Their faces were doughy clouds with glowering eyes — except for his mustache and fez, the Major was his wife’s doppelgänger (and vice versa). He was always trying to get to the racetrack or avoid work, while she was ready with a rolling pin to lay down the law. But I wasn’t interested in the Hooples: I was drawn to the short “topper” strips that ran above Ahern’s longer-format strips.

The topper for Room and Board was “The Squirrel Cage,” a loony strip that dealt in sight gags and contraptions. Colorful and lame and insane, it was the weirdest of Ahern’s creations, populated by impossible animals in a changing landscape — I’m told that Ahern was a pothead, and I believe it. Though it lacked the poetry of Herriman’s Krazy Kat, “The Squirrel Cage,” whose protagonist was a little hitchhiker with a white beard who uttered nonsense phrases (most famously, “Nov shmoz ka pop?”), was a surreal overkill pun patch. R. Crumb paid homage to Ahern’s little hitchhiker when, in 1967, he created his soon-to-be-iconic Mr. Natural character; Crumb was inspired by the archaic line of Ahern’s comics, as well.

I was also a fan of Ches and Wal, protagonists of “The Nut Bros.” (topper for Our Boarding House); these layabouts roomed at the Hooples’ place, and appeared in absurd screwball scenarios dreamed up by Ahern. Although “The Nut Bros.” would not prove as influential as the much weirder “Squirrel Cage,” I loved its paraphernalia: the beaten-up sofas and settees, the tobacco juice and cuspidors, all the shapes and fittings of Ches and Wal’s environment. “The Nut Bros.” just didn’t fit next to comic strips of the ’60s like Mary Worth or Peanuts; it was like a Stanley Steamer next to a ’58 Corvette. For me, that jarring juxtaposition was the attraction. 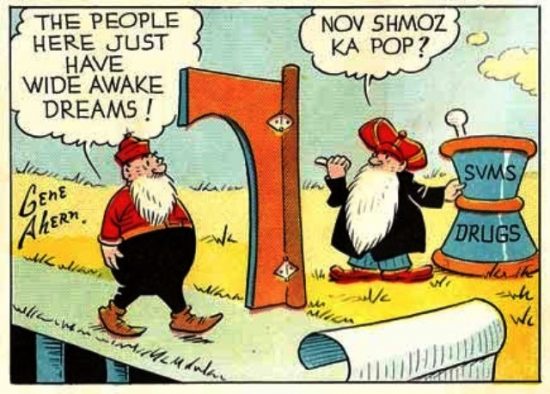