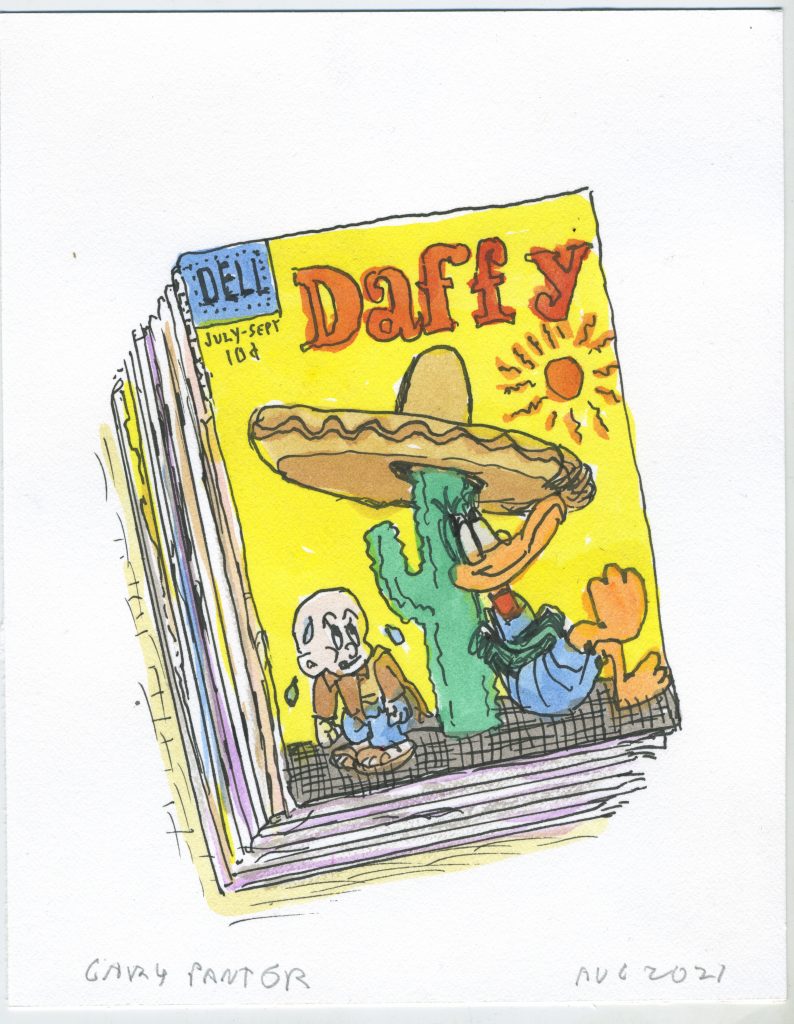 In the mid-Fifties my family lived for a while in Brownsville, Texas. My father managed two dime stores, the pre-pixel sights and smells of which — particularly the subdivided sections of the stores’ counters piled with toy soldiers, spacemen, cowboys and Indians, tin toys, plastic and ceramic dinosaurs — have stuck with me ever since. Along with southern Texas’s strangely printed Lucha Libre wrestling posters, and the two-color Popsicle wrappers purchased from a cupcake-shaped truck that seemed to come down the street every day, the dime stores’ treasures have strongly influenced my own aesthetic.

Below the toys you’d find a long, crowded rack of comic books. I pored over these, but was rarely allowed to take one home — especially not the scary ones featuring murder, monsters, or sci-fi weirdness. But then one evening my father brought home a huge stack of unsold comics, kiddie titles starring Bugs Bunny, Daffy Duck, Mighty Mouse, and Sylvester and Tweety, as well as off-brand funny animals. Plus other comics, I’m sure — starring the likes of Lassie, Casper, Little Lulu, and the Lone Ranger. I couldn’t believe my luck, and looked forward to exploring each and every issue at my leisure.

The level of art in these comics (except for Carl Barks’s Donald Duck comics, say, and Jesse Marsh’s Tarzan comics) was not impressive, and the color separations and print jobs were casual. But at the same time, these comics were perfect. They were simple and uncluttered, with nice big shapes, featuring strong telegraphic silhouettes. The colors were bright and composed. Even the printing mistakes were fascinating, something for me to puzzle over. As I grew older, comics would become more sophisticated and thrilling, evolving into complicated monstrosities with too much of everything — logos, muscles, chaos. The genius of R. Crumb’s covers for hippie “comix” like Zap and Head is how he emulated, in a satirical way, the innocent simplicity of comics like the ones in the dime store.

Unfortunately, shortly after the huge pile of comics made its appearance, my Choctaw grandmother had a nervous breakdown — supposedly precipitated by a viewing of the 1954 giant-ant movie Them! We left Brownsville in the middle of the night, to return to my grandmother in Oklahoma. I remember that on the way out of town, we stopped by the dime store. My brother fell off the soda-fountain stool he was spinning on and busted his chin on the floor — leaving a giant pool of blood.

Our neighbors were kind enough to send our belongings to Oklahoma. But they didn’t send the pile of comics. And we never went back.