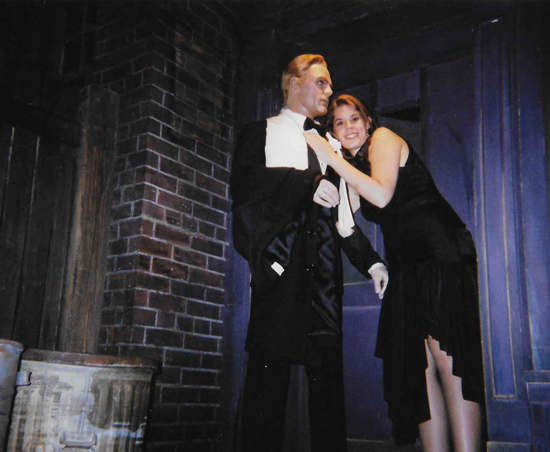 The author pictured with the unreal James Cagney and getting to touch his actual tux — which he didn’t wear in The Public Enemy but his family donated when they decided his robot double needed a zhuzh!

THE GREAT MOVIE RIDE THAT NEVER WAS

I once found myself on the arm of James Cagney. I was killing it in a sleeveless black gown with peekaboo lace at the bodice, satiny cinched waist, and uneven hemline. Mr. Cagney stood stiff yet dapper in a tuxedo with a white silk scarf draped over his shoulders and pale pink carnation in the lapel. I was working my way through college at The Great Movie Ride in Disney World. James Cagney was an audio-animatronic in Gangsterland, delivering lines from his 1931 film The Public Enemy on a loop.

When Disney’s Hollywood Studios opened on May 1, 1989, Michael Eisner described what was then called Disney-MGM Studios as “The Hollywood that never was but always will be.” Not a location on the map but the idea of Hollywood, a faded postcard of a promise tucked into our collective consciousness. A Hollywood that conjures You dirty rat in conjunction with Cagney even though he never said those precise words.

Movie Riders prided themselves in recreating magical movie moments for park guests. A typical Tuesday included escaping a shoot-out between rival animatronic gangsters, blowing up the town bank, ducking Alien goo, and trading barbs with the Wicked Witch of the West before following the yellow brick road to the grand finale. The Great Movie Ride, the last of the original MGM Studios attractions, closed on August 13, 2017. But I still ponder The GMR that never was but always will be…

I marvel that the room initially intended to be the tornado that whisked Dorothy away to Oz had been redesigned as the storm from Fantasia because of licensing issues. I thought it was odd having a whole section dedicated to a cyclical clip of Mickey and the buckets, but I never put it together that the film was projected onto a curved screen because it was meant to be the cyclone. I simply appreciated the humidity break provided by the wind tunnel.

The original finale was also imagined to be far grander than the ride’s vehicles pulling into a darkened theater for a three-minute movie montage of classic films. My favorite version of the possible alternative finales featured the floating head of the Wizard of Oz. Then the curtain would be drawn back to reveal a room filled with audio-animatronics of the stars who appeared throughout the ride. I like to picture park guests rubbing simulated shoulders with these icons. That finale may have given them the chance to feel how I did the night I climbed into the ride’s shadowy street corner during an after-hours event to pose for a picture with James Cagney — like I was the star of my youth.

Perhaps that feeling is why, years after the ride’s closing, so many Movie Riders continue to connect in a Facebook group eloquently summed up by its catchphrase: Once A Movie Rider, Always A Movie Rider. Many of us are strangers bound only by our shared love of a simulated experience, which is, of course, the true magic of the movies.

Kelly Jean Fitzsimmons is a New York-based playwright/screenwriter whose recent work has appeared in Liars’ League NYC, Serving House Journal, and the original web series Intersection. She is also the creator and producer of No, YOU Tell It!, a unique reading series that “switches up” the storytelling.