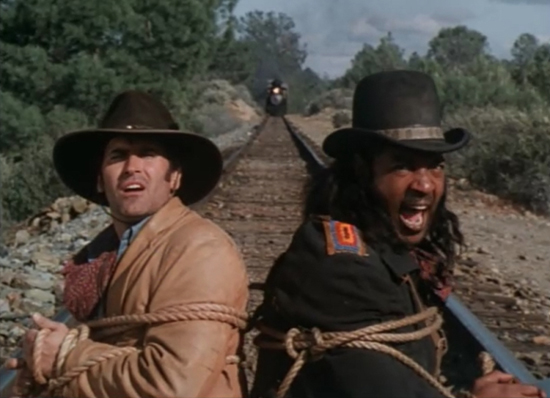 When you’re a B-movie star, primetime billing on a show where you talk to your horse may seem a fair enough proposition. But where might that offbeat tale of the West end up, given time?

By 1993, Bruce Campbell had wrapped his fantastically awful Evil Dead run — where he’ll forever retain the honor of “worst self-inflicted amputation performance” in cinematic history. The irreverent Campbell charisma was now recast on Fox TV’s The Adventures of Brisco Country, Jr. as a gentle yet savvy itinerant cowboy: Brisco the lefty gunslinger in tailored tan jacket, out to avenge the murder of his estranged dad, a famed lawman killed by a villainous time traveler (yep). Brisco grew up in 1890s small-town California, but went to Harvard and came home with a law degree. Then he chucked it all to the winds to saddle up as an oddball bounty hunter on the margins of society.

Here was a series set at the turn of the previous century, about an educated man who waxed of the “coming thing” and great technological change, atop a horse. Brisco flirted with prim dames, yet lost his heart to Dixie Cousins, a bodacious saloon singer. He worked for robber barons, but found brotherhood with a burly African-American bounty-hunting rival named Lord Bowler. By the finale, they’d turned secret agents of the President, and rode off for a well-earned hiatus — from which they never came back.

What might have become of this off-kilter show about contradictions and misfits, had it found its audience? Showrunner Carleton Cuse said Brisco strived to be “just short of over-the-top.” That liminal space between knowing and innocent camp not only gave breathing room to try anything under the sun (pirates raiding stagecoaches, proto-Elvis pelvic-swingin’ sheriff); it cultivated characters. Brisco gave us a silly world, filled with people we wanted to take seriously.

Cuse planned to make Brisco a sheriff next, saddling ol’ pointy-chin with responsibilities one step closer to the lantern-jaw mold of his Dad. But Brisco may also have given us a ’90s take on the enterprising Black man and self-made woman. Lord Bowler blew past his initial caricature as second banana, into a mythic tracker with a goofy laugh who remodeled his San Francisco mansion (bounties pay!) and dreamt of a winery in Napa. And Dixie transformed overnight from a sultry siren into a hard-luck survivor rebuilding her life.

For all the clichés about episodic TV going nowhere, Brisco’s characters changed at a brisk gallop. Season two would have reunited us with Dixie, returned from China (long story, featuring a baby emperor); would she retire the sexy songstress act, maybe buy a saloon in Brisco’s township? Would Bowler have returned as a groundbreaking Black lawman, then settle in Napa with his love Lenore, only to reteam with Brisco to investigate bizarro alien abductions of Jersey cows, or maybe square off against a vision-questin’ Geronimo pardnered with a gunslingin’ Frankenstein?

In its preoccupation with genre mash-up, Brisco mixed ’n’ matched the DNA of the Western with sci-fi’s charge to envision new societies and pluralistic possibilities. There were blind spots: every Asian was a railway laborer or ninja, and Native Americans were AWOL altogether. Might that SF impulse have led maverick Brisco — man of letters and fists — to reckon with Manifest Destiny, tongue still in cheek? Would he continue to live between worlds, or end up making a choice?

There’s so much we could’ve explored, in the mischievous guise of genres colliding. At least Brisco took down that time traveler and admitted his love to Dixie, before cashing in. As a card shark complimented him early on: “You cheated me fair and square.”

See All Posts by Sajan Saini

Sajan Saini is an education director at MIT and teaches on comics and superheroes. When he's not building online engineering curricula or meditating about capes and sequential art, he scripts animated explainers and writes comics. His work has appeared in TED-Ed, Marvel Comics, and Harper's.