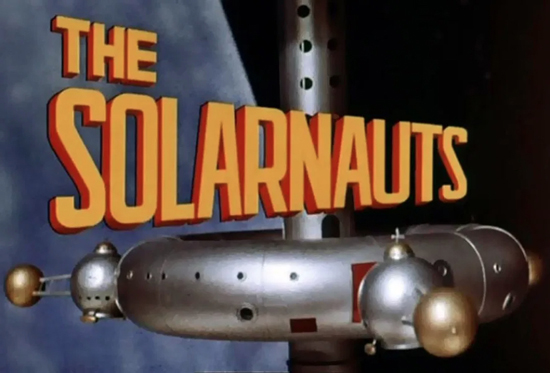 Hilobrows love the liminality of the unsold pilot, hanging in mid-air at the moment of its rejection, possibly passed with pixelated covers in cheap DVD cases, each a palimpsest of dust and stain from 100 sci-fi swap meets, embarking now on an eternal phantom voyage around the digisphere, finally at home, in a way, because nothing belongs in the scope of a near infinity of data — categories collapse, sets cannot hold and we sit gape-faced against a million billion monads scurrying across our horizons.

Or there’s a pilot like Solarnauts. Not so much a TV pilot as a site for meditation on the notion of mimetics, of the idea of the Secondary, and the role of bongos as high-fury signifiers of a brutally visceral narrative until we realise there’s no signified — the bongo played at furious speed in a theme song is the sum total of all the excitement that is on offer, signifying itself in an abstracted loop of self-determinacy that would send us all into a vertiginous semantic spin were it not for the fact that theme tunes rarely last for more than 25 seconds.

Solarnauts has such a theme tune, and the excitement builds, thanks to the magus Johnny Hawksworth, who specialised in over-compensating dull British TV shows with brazen beats and penthouse fanfares.

Solarnauts was made in 1967, and in colour, which back in 1967 was impossible unless you had special written authority from the late Prince Philip to invest good British pounds in such a gaudy New World indulgence. Colour was not only prohibitively expensive in Britain, it was generally agreed by the people who knew best that the sensitive British eye could not cope with a full spectrum popping out at any given moment, which might give leave to become over-jolly, serving as a source of merriment, jocularity, perhaps even communal singing.

Yet Prince Philip needn’t have worried. Solarnauts was very British, not so much a glorious failure as a tepid one, something of a mis-hit rather than a blooming catastrophe, just a little out of sorts rather than horrid, weird or, god forbid, cerebral.

And although no-one at NBC is on record calling the first Star Trek pilot “too cerebral,” Gene Roddenberry liked to put it about as the reason the slightly stuttering and kinky first pilot didn’t fly. There’s certainly not much clever-clever in Solarnauts, just two chaps flying about in a ping-pong-ball ship, commanding a two-man bridge — again a plot intervention from Prince Philip who had by now taken a personal interest in the show, and had famously said of the starship Enterprise, “I suppose one would need a complement of 420 if they’re all a bunch namby-pamby liberals and go-go dancers.”

Could Solarnauts have survived? How many stories could have been wrought from commercial disputes about mining rights this side of the Asteroid Belt? Could the main characters, Power (standard boring cold American beloved of UK ’60s casting), Tempo (standard more-interesting Beta character beloved of every genre show in the ’60s) and evil Logik (pronounced Low-jick, and thus beloved, just possibly, by Bertrand Russell and his positivist chums) win the hearts and minds of generations of wide-eyed wonderers for fifty years to come? We shall never know. But I have a strong hunch.