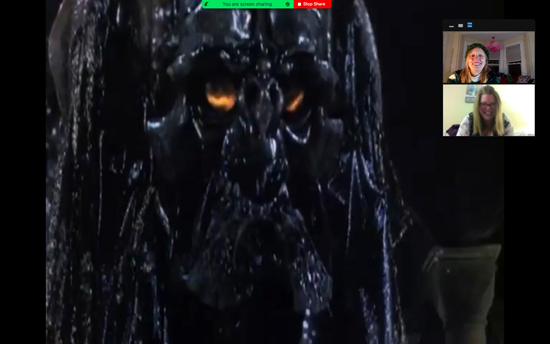 Kerri and I reliving the horror that we first encountered 40 years ago, with the same results.

THE WATCHER IN THE WOODS

The weekends began with a trip to the local Dial-A-Video. Dad and I would arrive on Friday evenings and curate that weekend’s roster of films played at his apartment in Staten Island. Without closing my eyes I can see the VHS box designs for movies like C.H.U.D., Valley Girl, and Blame it on Rio.

In those days a lot of new releases would come with trailers for upcoming movies produced by the same studio. I don’t remember the video that opened with the trailer for Disney’s The Watcher in the Woods, but I’ll never forget the trailer itself — a blindfolded blonde girl, her arms reaching toward me, imploring, “Help me!” My best friend Kerri Parise and I agreed this looked like a winner.

Kerri and I shared an early love for horror movies — like, when we were barely out of diapers. Most of these movies were ridiculous, though some, like Tourist Trap, a slasher starring Chuck Conners, Tanya Roberts, and mannequins, terrified us. My Dad never really minded as long as there wasn’t any sex. (I watched The Exorcist when I was 11, but all I was allowed to see of Purple Rain was the end where Prince sang “Purple Rain.”)

While this was happening, Disney was going through its own growing pains, trying to branch out from animated romps into more “adult” fare. Even rewatching as adults, little of it has grown on Kerri and me.

The Watcher in the Woods starred Lynn-Holly Johnson (’70s famous for teen-movie weeper Ice Castles); Bette Davis; Paris Hilton’s aunt; and The Man from U.N.C.L.E’s David McCallum, who wisely drives straight out of the film within the first half-hour.

What I had waited so patiently for, the film with the blindfolded girl beckoning me — Was she alive? Dead? Trapped in another dimension? (It was that one.) — turned out to be a hilarious comedy. How scary was this movie? Five-year-olds were laughing at it. In trying to be all things to all people — wanting to break from Snow White and The Aristocats but fearing to truly do so — they made a horror movie with no horror.

A year later they would try (intentional) horror-comedy with The Devil and Max Devlin, a film that presciently starred Bill Cosby as a devil and (I believe) ruined co-star Elliot Gould’s career. True to Disney’s try-everything, succeed-at-nothing business model of the time, Devil had started life a decade before as an unsold Hammer horror script; its heavily rewritten screen version would recycle some footage from The Black Hole, Disney’s 1979 Star Wars knockoff which was first conceived as a “space disaster film.”

The Watcher in the Woods itself had at least three different endings filmed: one which had Paris Hilton’s aunt possessed; one which had a creature that looked like it was made from Hefty bags; and one with the same creature, except it came from outer space and shot lasers out of its eyes. That particular ending was filmed much later because of an actors’ strike, and not even in the same country. Bette Davis had by then gotten a haircut, and there was a different actor playing her daughter, who I think was a man. My Mom and Dad handled co-parenting with less drama.

See All Posts by Heather Quinlan

Heather Quinlan is a writer and filmmaker whose first film, a short titled O Brooklyn! My Brooklyn! was called “Charming ... an endearing way of making an old poem more relevant” by The New York Times, and whose feature-length documentary on the New York accent, If These Knishes Could Talk, was covered in The New Yorker, The New York Times, WSJ, NPR, NBC, CBS and the BBC, and screened at the Library of Congress. In addition, Quinlan recently wrote Plagues, Pandemics, and Viruses: From the Plague of Athens to COVID-19, published by Visible Ink Press. Quinlan is a native New Yorker who’s lived in all five boroughs and now resides in New Jersey with her husband, writer Adam McGovern.