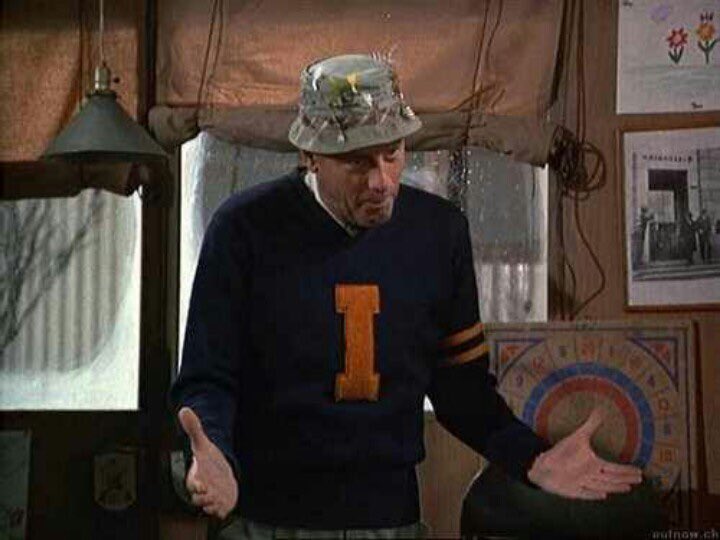 The critically-acclaimed sitcom M*A*S*H ran on CBS from 1972 through 1983. Based on the hit 1970 Robert Altman movie, it concerned a motley group of anti-authoritarian U.S. army doctors during the Korean War, who dealt with stress by drinking, pulling pranks and seducing nurses. The TV version was ahead of its time by not bowdlerizing the content too much. Obviously, profanity and nudity were cut, but otherwise it remained pretty outrageous for its day. I was seven when M*A*S*H premiered and not permitted to watch the first few seasons on their original airings. But the show remained on the air until I was a senior in high school, and by then the syndicated earlier seasons were airing daily in the after-school block. That’s when I discovered this glorious show.

Alan Alda as Hawkeye Pierce was M*A*S*H’s breakout star, but competing with him for the top spot was a very different comic actor, McLean Stevenson, who played the M*A*S*H hospital’s reluctant commanding officer Lt. Col. Henry Blake. What about a wishy-washy, middle-aged, golf playing doctor should grab the heart of a teenager? I think, plainly and simply, it’s because Stevenson was so authentic and so funny. It was the best work of his career. Rumor has it that he was playing a version of his own father, a physician in Normal, Illinois, and a cousin of the ultimate Cold War trivia question, Adlai Stevenson (for whom McLean had actually worked as a young man). His performance had great specificity, about the job, and about the era in which the show was set. He was period-accurate in the same way the décor or wardrobe might be. Anchored so well, it freed Stevenson up to be really funny. He sputtered and yelled (ineffectually) like Daffy Duck. He was always doing some physical business that illuminated his character or the situation. I’m sure that he tweaked his dialogue to be funnier. And that costume! The fishing hat with hooks in it, the college sweaters.

And then… his famously swelled head. Audiences loved Stevenson, and he knew it. He left the show after the third season, expecting to move on to better things. So the producers punished him by killing his character. The episode is called “Abyssinia, Henry”, the title a reference to a typical Stevenson joke, a pun on “I’ll be seein’ ya!” Which of course, we wouldn’t, ever again. When I first saw that episode it punched me right in the stomach just as it was intended to, even though I knew it was coming, for it had aired several years prior to my watching it, and Stevenson was by then the star of the egregious NBC show Hello, Larry. But it didn’t matter. That version of Henry, that vivid character which Stevenson had brought to life was dead, and it felt so real. A good lesson there: the best comic acting — is just good acting.

See All Posts by Trav S.D.

Trav S.D. (Travis Stewart) is best known for his books "No Applause, Just Throw Money: The Book That Made Vaudeville Famous" and "Chain of Fools: Silent Comedy and Its Legacies from Nickleodeons to Youtube" as well as his historical pop culture blog Travalanche (travsd.wordpress.com). He has written for The New York Times, The Village Voice, American Theatre, Time Out New York, and many another publication. Hire him for your next birthday party or Bar Mitzvah.