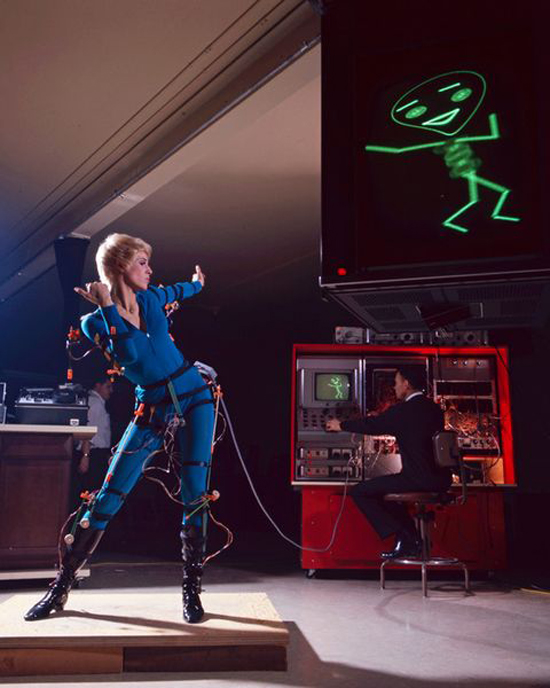 Have you ever heard the one about the TV show that was supposedly so bad, it was canceled while the first episode was airing?

Well, it really happened on Wednesday February 5th, 1969, to a show called Turn-On. It was on ABC, and was created by George Schlatter and Ed Friendly (the then-hot producers of Rowan & Martin’s Laugh-In). It might have seemed doomed from the jump, because it was rejected by CBS and NBC, back when there was no escape to cable or streaming.

Though it may have had no future, Turn-On was wayyy ahead of its time. The premise of the show, that it was totally produced by a computer, not human beings, anticipated the now-common idea of AI. The only background music was the sounds of the Moog synthesizer, and there were NO SETS, just a plain, white void for a backdrop. And its animated dancers were hooked up to a cave-painting prototype of motion capture.

Now, Laugh-In was doing crazy things, and had kooky little video clips, and was fast-paced, but it had special guests, and lampooned everything from President Nixon (who was also a guest!), to the Vietnam War, fashion, music, and sex. Turn-On (as per one of the entendres in its sex/drugs/computers name) was ALL ABOUT sex, which to me is a big stretch. How many truly funny and sophisticated boob and dick jokes can you write for a half-hour show?

Anyway, Turn-On was non-stop, rapid-fire risqué skits, with little let-up… and without the benefit of TV’s most reliable real-life machine, the laugh track. The production credits would also cut in over the course of the show instead of at the end, which may have been its most forward-thinking idea: switchboards lit up with complaints about this hot-minute mess, and TV stations yanked it off the air as fast as they could, replacing the rest of it with a black screen and organ music, or a test pattern with no sound. A second episode was completed, but has never aired, and is floating in the ether somewhere… or in a box in someone’s attic or basement (or one media museum in Midtown Manhattan, if you think it’s worth the trip).

Thanks to the internet, you can Google it and see a few clips from that fateful airing, and learn why it’s made so many “Worst TV Shows of All Time” lists. Turn-On can never truly be turned off!

See All Posts by Crystal Durant

Crystal Durant/DJ Crystal Clear is a DJ, professional muse/model, singer, visual artist/art educator, and storyteller, who has a great podcast, Original vs Cover with DJ Crystal Clear, that’s on Apple, Anchor, and other platforms. Follow her on Instagram at DJCrystalClear and CrystalTheMuse — and on Medium at DJ Crystal Clear.