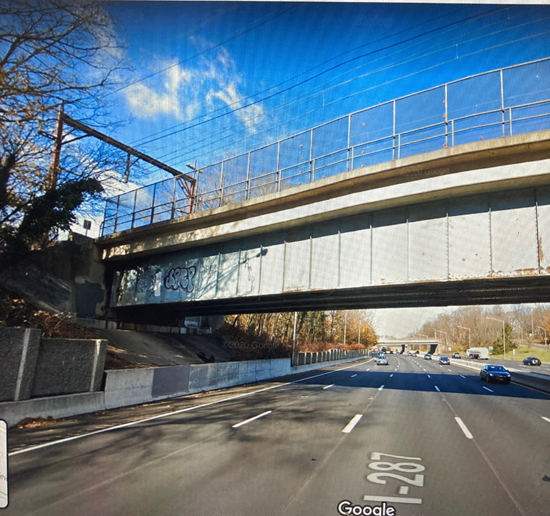 We were forty feet above a New Jersey highway, on a train overpass, at 4:00 am. Charlie and Sid’s first mission. I wasn’t worried about Charlie. The derelict was strong in’im. Sid’s measured steps betrayed his ambivalence. The wee-hour-creepin’ intrigued him enough to keep up with Solomon and Raul, the experts.

As trucks zoomed beneath us, the gusts of air they shot up rattled the chain-link fence on the overpass. Tonight, the fence was our frame for our 48 feet by 12 feet protest banner. Demanding “Don’t Deport Kids!” this banner would jolt drivers out of their monotonous commute with a portrait of a child separated from his parents at the US-Mexico border, juxtaposed against a portrait of Congressman Frelinghuysen. It was 2017 and Congressman Frelinghuysen was the Budget Committee Chair, which gave him the power to defund Trump’s agenda. The message was clear: Frelinghuysen himself was to blame for family separation at the border. Thousands of moderate voters would see it on their way to-and-from work.

“Bro! Be careful!” Through clenched teeth, I tried to guide Raul as he climbed the eleven-foot fence. Raul reached the top and straddled the fence above the freeway. The depth of the purpose and the weight of the responsibility felt thick on my bones. I shoved visions of Raul dropping fifty-one feet to his death out of my mind.

“Get the fuck down!” Solomon finally ordered.

“We’ve climbed higher shit,” Raul shrugged. I guided Sid to get closer and to help secure the zip ties, ignoring my own fear and refusing to acknowledge any I sensed in Sid. The chain links were small, and the fence was made of a thick coated metal that made it difficult to thread quickly. We were racing against the sunrise. No time for fear. Once the extremities were secured, and the length of the banner attached, we sprayed each connection with Loctite plumber’s foam so the ties wouldn’t be easily cut. Mission complete.

Once safely back in the car, we drove onto the highway to admire our work. It was big, bold, and Frelinghuysen was sure to palm his face once he got word of it. I headed home with exhausted satisfaction, eager to drive past the banner on my way to work later in the day.

Even without a full night’s rest, I awoke feeling confident. We combined the bravado of street art with the power of civil disobedience to keep families together. I checked my phone to find text messages asking where the banner was. I pitied the fools who could not locate our triumphant protest art!

I sped onto the highway planning to snap a flick of our masterpiece to send to the press. I arrived at the overpass and saw the carcass. In just six hours, the wind ripped our banner from the fence. We failed to include wind vents. In 2019, Frelinghuysen finally left office, after 24 years. Families separated at the border are still waiting for reunification.

See All Posts by Brian Lozano

Brian Lozano is a civil and human rights advocate. He is a rehabilitated graffiti artist and has contributed very minimally to street art scenes in U.S.A., Colombia, Peru, and Bolivia. He now spends most of his time reading, writing, and painting the occasional mural.