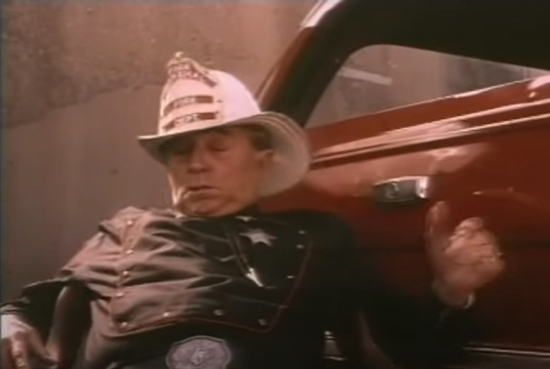 It is still hard to believe that Backfire is a real movie. The 1994 direct-to-video-in-Southeast-Asia romp featured Robert Mitchum (in his last role, and in drag) as the chief of an all-female firehouse.

Nevertheless, these things did take place: On May 26, 1994 — my 28th birthday — my friend (let’s call her Southie) showed up at my doorstep in the late morning, saying we were going on a birthday adventure.

Southie’s boyfriend (a real person) was on set at the Shooting Gallery in TriBeCa. Southie’s boyfriend was then and is now always on set. (He spent the pandemic on a Zoom set, doing an extended, months-long improv so deep it can better be described as LARPing.) So I failed, at the time, to see how this qualified as a birthday adventure. But it was a lovely day, and Southie was good at surprises, so I went along.

The Shooting Gallery, a production facility in Matthew Brady’s old Civil War photography studio, was in a state of joyful chaos. Wires snaked everywhere. Dollies careened. Southie led me past Telly Savalas who was bleeding profusely from his right ear (it was to be his last role as well); past Kathy Ireland (who was smoking); past Josh Mosby (also smoking); past Shelley Winters (who was pinching a shrieking grip’s ass); past a larval Edie Falco — who even then radiated presence.

We ended up on a half-dressed set, and there, in his glory, was screen legend Robert Mitchum. I’m not the squealing fangirl type, but inside me there was a squealing fangirl. Mitchum was holding melted silicone breast implants against his pecs, over his shirt. I’d barely registered this fact when Mitchum’s guy leapt out of a chair and interposed himself between us and the bemused superstar.

“Bob, these are the girls, Johnny’s friends.” Bob leered. “Which of you two is the biggest fan, would you say?” he asked.

Southie shrank back, saying “Oh, she is. I don’t even like movies.”

“Oh, I don’t think so,” he said. Drawled. No account of Robert Mitchum is complete without this word.

Southie grabbed my hand and dragged me away. She was mortified, and I was laughing. We walked in silence for about ten blocks.

Firehouse 2: Planet of Women, a sequel to a spoof of Ron Howard’s Backdraft called Firehouse, was the brainchild of CinemaScience’s J. Christian Ingvordsen and the writer Dean Bell. The budget, for a straight-to-video-in-Southeast-Asia spoof, was enormous, and most of it went to that one day of shooting the three big names, Bob, Telly, and Shelley.

It is a preposterous goofy mess, crammed with every cultural reference anyone could think of — one line of Josh Mosby’s starts at Amy Fisher and ends at James Joyce. Renamed Backfire in post-production — this explains why I was never able to convince anyone that it exists — the movie seeks to contain every possible running sight gag from the silents, every trope of the Zucker Bros satires, every gossip rag story of the Nineties, and every old-skool face-morphing special effect from Total Recall.

CinemaScience has a few other movies which exist in an uncertain space. Blue Vengeance was made in 1989 and first released thirty years later after a protracted legal battle. Breaking Bone, due out this year, combines the Zoom LARP sessions with thirty-year-old footage the team had to have mold professionally burned off of. I plan to see it with Southie at a drive-in. Drive-ins are real, right?