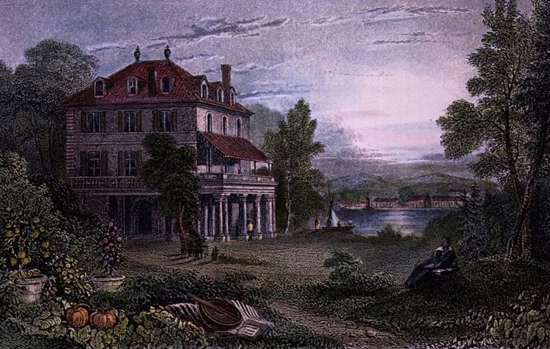 I can never accomplish anything in the summer.

How could I? The heat smothers all the creative pores — if only I was somewhere else, somewhere idyllic and soul-affirming…New Mexico, for instance:

Santa Fe, elevation 7,199’, high wind, the chimes at my Airbnb ring out in pleasant cacophonies by daylight — the howling can get a bit menacing at night. It’s not exactly a vacation, as much as a self-guided writing retreat; after more than a year of looking at only my bedroom walls, I was longing for anything else at all. So here I am, sitting at the dining table for 8+ hours a day, swigging on my 5th cup of coffee (of the morning), typing away on the keyboard…

To be honest, the lifestyle of a writer is ultimately quite similar to that of a vampire: we are vain, we’re hopeless in outdoorsy situations, and would rather “rage against the dying of the light” in a literary way than confronting any actual storm. So in true Byronic fashion, I’m taking pride in my two permanent dark circles and lack of enthusiasm for sightseeing — we’re still in the midst of a pandemic, an additional excuse for me to stay put. It does make me pause to think about George though: George and his gang of geniuses, and their particularly generative summer of 1816 at Lake Geneva.

April 1815, a volcano erupted in Sumbawa; a year later, across Europe and North America folks were getting sick of the “incessant rain” of that “wet, ungenial summer.” Lord Byron rents Villa Diodati for 6 months straight (because that’s what you do when you’re a lord and you want to get away from paparazzi who only want to ask about your marriage problems and your affairs with your half-sister). Anyway in June, the weather was particularly dreadful, so the Byron gang turned to fantasy novels during their quarantinelity time.

And then they started writing their own. A summer of cold, and storms, and darkness — rather ideal for the birth of goth fantasies, don’t you think? Mary went on to produce Frankenstein, and turned out to be the most influential of them all — but back then she was still the 19-year-old girl trying to make her mark in a dude’s world, with a romantic poet for a husband and a major fuckboy for a group leader. But here we turn instead to George’s fragment (“Fragment of a Novel” (1816), or, “A Fragment”, or “The Burial: A Fragment”).

“A Fragment,” indeed, was not the first time Byron revealed his interest in vampirism. Back in 1813, he wrote of them in The Giaour: A Fragment of a Turkish Tale (lines 757-768). Except George, being George, denied it completely. In April 1819, he wrote in a letter, “I have besides a personal dislike to ‘Vampires,’ and the little acquaintance I have with them would by no means induce me to reveal their secrets.”

That letter was, of course, probably a reaction to what happened on April 1, 1819, when the novella titled The Vampyre was published, with the attribution “A Tale by Lord Byron,” which was false, since his personal physician John William Polidori wrote the thing and based the main character on Byron himself.

Whatever his view on vampires and vampirism truly was, Lord Byron’s name (and fashionably-starved pallor, and perhaps even his death, now thought to have been hastened by doctors’ bloodletting) would forever be bound with the origin of that particular subgenre of horror, in which vampires could be characters that we lust over as much as fear, giving the world the charismatic aristocratic fiend as a prominent member of the modern horror canon — otherwise we’d only be chewing on the bones of Nosferatu instead of dressing up as the glamorous Dracula on Halloween, or writing fan fictions about a particularly sparkly boy.

At the end of Lord Byron’s “Fragment,” the narrator buries the elderly Augustus Darvell, heeding his command to conceal his death from every human being. It was still dark, and gloomy, and the storm was raging on, so the trendsetting fragment ended there, quite abruptly — but it did start something new.

You’re never meant to finish anything in the summer anyway — and here I still am, sitting in the same spot in sunny Santa Fe, hoping that I’ll be starting something brand new as well. I might even try to finish it.

See All Posts by Ran Xia

Ran Xia is a Shanghai-born, Brooklyn-based playwright, director, and sound artist. Resident Director at the Tank (Inaugural Artist of the Year award, 2019). Recent directing credits include the cinematic theatrical hybrid production of Prometheus Bound (Howard Rubenstein), In Blue (written and directed), world premiere of Independent Study by Ben Gassman, US premiere of The Tallest Man in the World by Ailis Ni Riain, etc. Beyond the Tank, her works have been seen in physical and virtual spaces around NYC and beyond, including Dixon Place, IRT, HERE arts center, The Brick, The Wild Project, and more. She was also a directorial collaborator on Risa Puno’s The Privilege of Escape with Creative Time. A frequent collaborator of Exquisite Corpse Co. (audio/visual installation Echo at the Memory House, on Governors Island; co-wrote The Enchanted Realm of Rene Magritte; sound designer for the NYC Critic's Pick production of Zoetrope). Alumna of Pipeline Theater's Playlab 2019/2020 (Chava the Giant and the Oldest Bird) and IRT Theater's 3B Residency. Artistic Resident at Access Theater. Assistant Directing credits include: The Invention of Tragedy (Mac Wellman, Dir. Meghan Finn at the Flea); The Great Leap (Lauren Yee, Dir. Taibi Magar at the Atlantic), and Refrigerated Dreams (Carrie Mae Weems, Nona Hendryx, Francesca Harper, and Niegel Smith at Joe's Pub). She's a commissioned writer at Vanderbilt University (To Stab a Butterfly In the Heart, Fall 2021), and will be guest directing Orlando (by Sarah Ruhl, after Virginia Woolf) at Barnard College (Fall 2021). Recipient of the 2021/22 Beatrice Terry Directing Residency at the Drama League. ranxia.info