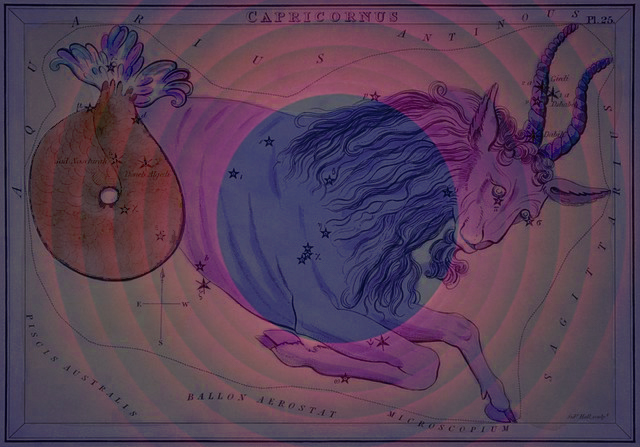 Capricornus as a sea-goat from Urania’s Mirror (1825), via Library of Congress.

I spent the pandemic lockdown with goats. Goat videos flooded my Instagram feed: Pygmy kids in pajamas; crazy-eyed Nubians jumping off of parked cars; and shaggy white Sannen butting heads. In real life, I live across the street from pastureland inhabited by a trio of Sables, a brown version of the Sannen breed with black faces and long horns.

From my desk, I watch my horny neighbors ruminate and doze in the sun. They personify basic aspects of the human personality—horny, hungry, combative, sexy beasts. Did you know a male goat can ejaculate sperm over four dozen times a day? We call infant goats “kids,” and apply the term to our own offspring, since both creatures display a rambunctious playful energy. I love that goats never lose that mischievousness; head-butting and leaping off structures well into maturity. In fact, mature goats are the equivalent of drunk frat guys. Goats are such enthusiastic breeders that my hairy neighbors constantly rut—the males copulate with their tongues hanging out. Unfortunately, I’ve yet to find a goat pop-culture equivalent to Shari Lewis’s Lamb Chop to play with.

Goats have played a crucial role in human development and imagination. They are a primal companion, serving as efficient livestock for people all over the globe since ancient days. Sheep and cattle may be a better investment, due to their higher yield and easy transport of their byproducts (wool, milk, meat). Yet goats are utilitarian little beings. Even the humblest household can afford a goat. You can make textiles from your goat’s hair, drink their milk, and make cheese from the excess. Preferring to browse shrubs, unlike grass-eating ruminants, goats clear overgrown brush with ease. They have proven to be an effective wildfire prevention tool. Their docile, social nature makes them a petting-zoo staple. Now, New-Age types flock to goat yoga classes. Unlike most farm animals, goats even hold eye contact with you.

Goats populate our ancient myths and legends, serving as avatars for humanism. In Greek mythology, half-man, half-goat nature spirits were called satyrs, embodying man’s feral impulses. The most famous satyr was Pan, god of woods and fields, who served as Dionysius’s wing man. Representing pure instinct in contrast to civilization, Pan is the root word for panic, reflecting man’s tendency to go mad with terror when beset with fears in distant lonely places. Marsyas is another famous satyr who challenged Apollo to a musical contest, pitting his flute against the god’s lyre. Since Apollo’s acolytes were the judges, it was a fixed game, and Marsyas lost. Apollo flayed Marsyas alive for his hubris. Roman mythology adopted satyrs in a watered-down version and renamed them fauns.

Capricornus, the Constellation, is a sea goat that signifies the astrological sign of Capricorn and reminds us of the sea goat’s role in suckling baby Zeus after his dad tried to kill him. Another legend says Capricornus memorializes Pricus, a god who could manipulate time like the father-god Chronus (Saturn). Half goat, half fish, Pricus used his time-warping skills to prevent his offspring from abandoning the sea for land, sacrificing their reasoning skills in the process. Unfortunately, no matter how much he turned back time he could not erase his progeny’s fate.

The horned god form was demonized in the Christian era. While Christians adopted the lamb as a symbol of Jesus Christ, goats were equated with the Devil. Nineteenth-century cccultist, Eliphas Levi, appropriated Mendes, goat-faced god of ancient Egypt, as the model for his Hermetic glyph, Baphomet, whose face mirrored a pentagram. Representing complex occult principles, Baphomet became the model for the Devil, a Tarot Card in the Major Arcana. After that, pop culture always equated goats with rituals involving the Devil. Anton LaVey appropriated the Goat of Mendes as the symbol for his Church of Satan in the late ‘60s. In Rosemary’s Baby, the eponymous infant’s pupils were horizontal slits, like a goat.

Perhaps due to its Satanic association, the goat has never caught on in modern pop culture. Even Sam-I-Am would not, could not, eat green eggs and ham with a goat on a boat.

Warner Bros.’ Looney Tunes stable of cartoon animals didn’t include any anthropomorphic goats. Mickey Mouse’s menagerie, too, excluded frisky kids. Yodeling puppet goats do brighten “The Sound of Music,” however. Sure, we’ve got “Billy Goats Gruff” Norwegian fairy tale and the “Bill Grogan’s Goat” Scout song, but no fully-fleshed goat character inhabited cartoons until Secret Life of Pets 2 (2019), when Max, exiled on a farm, befriends Goat. The barnyard co-stars of the 2016 reality TV fixtures “The Fabulous Beekman Boys” don’t count—can you name one of the goats in their herd?

Gazing at goats all day has given me a persistent earworm—I keep humming the tongue-twister ’40s novelty song, “Mairzy Doats”—