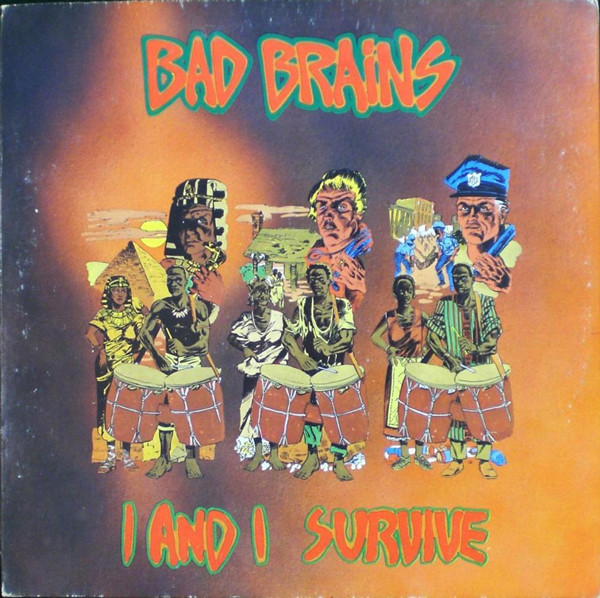 Being black in America is crazy-making. As I try to make it through each day — juggling creative projects with figuring out how to earn a living, now that I’ve left my job as a corporate lawyer — I’m increasingly drawn to the Bad Brains’ 1983 album Rock for Light, with its mix of hardcore ditties and reggae songs. Among the latter, the melodious “I and I Survive” — which first appeared as a single in ’82 — is my anthem.

In Washington, D.C., in 1977, brothers Paul D. (“H.R.”) and Earl Hudson formed the band that evolved into Bad Brains with Darryl Jenifer and Gary Miller. Bad Brains shows were fast, loud, musically sophisticated, and spectacular; H.R. performed with an intense physicality, doing back-flips, moshing, and stage-diving. Preaching the gospel of “PMA” (positive mental attitude), H.R. countered the violent nihilism of white hardcore punks who mostly hailed from D.C.’s suburbs. Touring with Minor Threat and other bands, H.R. encouraged Straight Edge kids who eschewed drugs, alcohol, tobacco, meat. Although a novelty on the scene for being an African American band, Bad Brains helped develop the template for hardcore punk nationwide. And although we might not think of reggae and punk as having much to do with each other, let’s not forget that the Sex Pistols only listened to reggae on their tour bus; and the 1981 Brixton riots, led by black Britons, were hugely influential on punk.

And why must the rich man keep on hoarding all the money / And why much this poor man, my living ain’t very funny. / No, not I. I and I would never try.

H.R. grew more troubled, as the years passed. He become mercurial, violent. There are many “crazy-ass HR” stories of missed concerts, paranoia, eccentric outfits, hallucinations, and stints in jail. He changed his moniker from “Hunting Rod” to “Human Rights” to “Joseph I.” Though “I and I” is a Rasta expression, it could be interpreted as the singer’s battling personalities as he struggled with untreated schizophrenia and homelessness. With Jah’s help, though, H.R. has survived. In one form or another, Bad Brains has continued to perform. I find that very heartening.

The “nation” in these lyrics is Jamaica — but it’s also the African diaspora throughout the centuries, as depicted on the cover of this single. It’s hard to be black in this world, and it always has been. But we will survive.