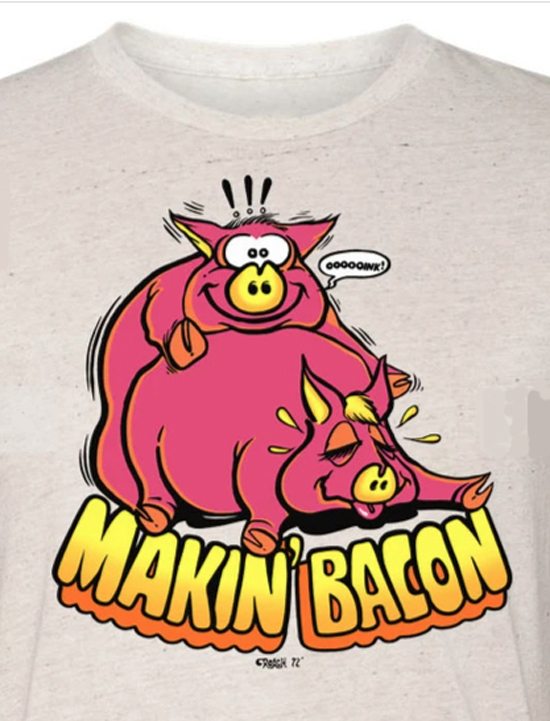 At the 1976 Pomona County fair, I saw a t-shirt emblazoned with a line drawing of two pigs fucking under the headline: “Makin’ Bacon.” I gawked at it. I took in the illustration. Two happy pigs fornicated in the mud outside of an outhouse. The crude drawing mimicked the hayseed style favored by Hustler. The swine balled with enthusiasm. I studied the words. “Makin’ Bacon.”

The word bacon caught my attention first. I loved bacon. My mouth watered at the thought of the crispy pork byproduct. The shirt’s words and image taught me that procreation led to food in a manner more straightforward than any “A Day at the Farm” film strip could. I slowly realized the shirt’s humor. I chuckled. It was interactive apparel. I stepped into the vendor’s stall, prepared to obtain my prize. The shirt was $3. I only had $1. I looked for my father who was examining Mexican jumping beans a few yards away.

“So I can buy that?” I said, pointing at the shirt.

My father looked at the shirt. He looked at me and frowned.

“No,” he said in a voice that signaled an end to the conversation. He pulled me away from the storefront, hoping to distract me with bowls of goldfish. I looked back at my object of desire with longing. I never forgot.

That day I learned the power of humor. I also learned that sex doesn’t just sell, it sizzles. In my innocence, I didn’t realize that shirt was an equal opportunity offender.

That raunchy illustration would have provoked a strong reaction in the ’70s. Kids on the playgrounds would have laughed at the animal sexuality. Prudes would have banned it, fearful that the shirt’s hedonistic message would corrupt minors.

But I didn’t think about that. In stark terms, the shirt declared my love for fried bacon — salty strips of meat surrounded by unctuous rinds of fat. Its scent has a liminal quality in the morning, pulling me from sleep to consciousness like a lover awakening you with kisses.

My romance with bacon began in infancy. Left alone in my highchair one morning, I saw a plate of bacon sitting on the kitchen table. But my arms were too short to reach those strips of deliciousness. Using the weight of my body, I maneuvered my chair closer and closer. I grabbed the bacon just as my seat tipped over. My family rushed back to the kitchen after hearing the commotion. They found me on my back, still strapped to the chair, gnawing bacon.

But not everyone loves bacon. Had I worn that shirt around town, it would have enraged vegetarians. It proselytized eating meat. Even worse, it extolled the virtues of pork: a foodstuff forbidden by dietary laws observed by practitioners of many religions.

Taboos against the consumption of pork make sense as it’s bad for you. If you eat a slice of undercooked pork, you can get trichinosis, toxoplasmosis, or tapeworms. Bacon may cause food poisoning due to Listeria or Staphylococcus contamination. Researchers have discovered that cured pork meats can give you a liver disease called hepatitis E virus (HEV). Overconsumption of bacon itself will give you heart disease and colorectal cancer. If the fat doesn’t kill you, the nitrates will.

I’m no longer twelve. I now have the means to buy that shirt. I can even obtain the Ed Newton original (a character in the ’80s movie The Karate Kid sports a version of the shirt, exposing three generations to its charm). But I still wouldn’t wear it in public. In our oversexualized culture, the shirt’s sexual imagery looks quaint. But food taboos persist. Viewers may snicker at first but I’m sure they’d shudder inwardly. These days we can’t say we don’t know about the cruelty and pollution of factory farms. Like cigarettes, eating bacon isn’t socially acceptable anymore. Now, it’s a health hazard I’d hesitate to practice in public. Who wants to wear a shirt that reminds people of death and disease? That’s the garment’s perverse appeal. Like the porkers’ orgasmic delight, some things are best enjoyed in private.