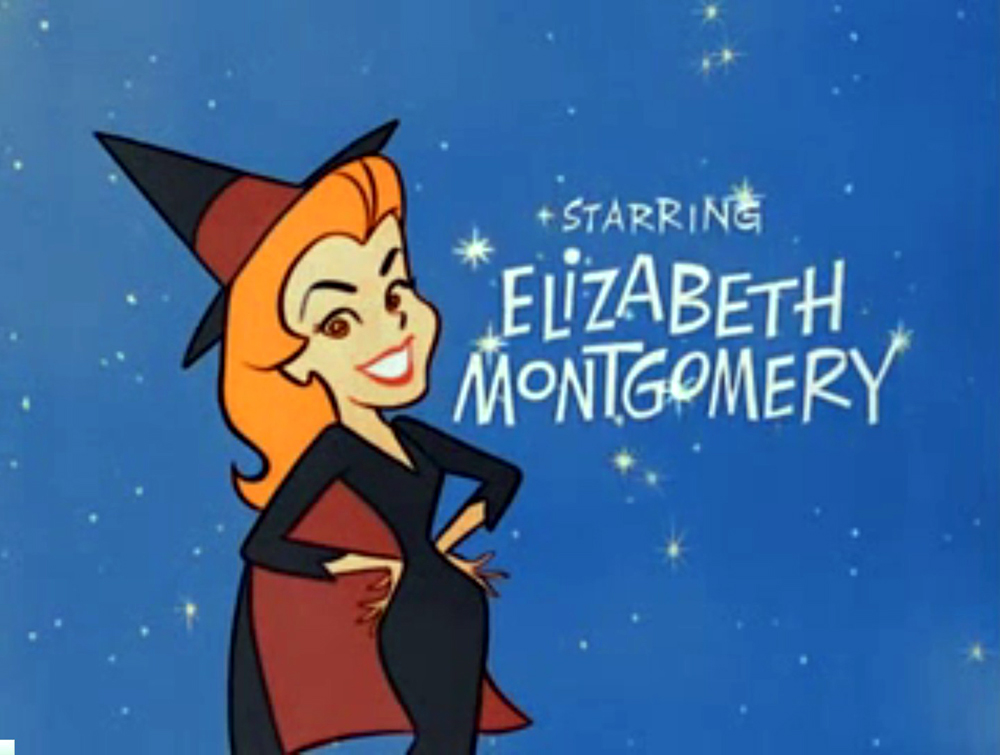 Bewitched enchanted me. The sitcom, about an advertising account exec (Dick York as Darrin Stephens) who marries a witch (Elizabeth Montgomery as Samantha) and asks her to adopt the life of a suburban housewife, taught me that magic was bigger than mere tricks. Samantha and Darrin opened my eyes to a variety of secrets… hidden in the worlds of visual effects, advertising, and cultural politics.

The show started in 1964, and the first 74 episodes were filmed in black-and-white; the show switched to color in ’66. I started watching in ’68, so whenever black-and-white episodes were rerun, I became aware that color TV hadn’t always existed. And this revelation made me hyper-aware of the show’s (pre-CGI) visual effects. Samantha’s signature nose twitch, used during spell-casting, was a camera trick — techs sped up the film as Montgomery wiggled her upper lip. To facilitate Endora’s frequent pop-ins, Agnes Moorehead would walk in/out of the frame while the cameras were stopped; meanwhile, the other actors would freeze in their positions. Special effects teams managed flying effects with wires and wind machines. When making Dr Bombay’s flashy entrances, actor Bernard Fox contended with smoke machines and firepots.

Bewitched played tricks with my head as well. In 1972, Dick Sargent replaced Dick York in the role of Darrin. Bewitched kept viewers on our toes: The “Darrin Switch” was only the most noticeable on-screen character alteration. The role of nosy neighbor Gladys Kravitz was shared by two actresses, while Elizabeth Montgomery played her alter ego, Cousin Serena, on a frequent basis.

I loved all the witchy stuff, but it was Darrin’s occult world of advertising that transfixed me. Bewitched was one of the first shows to reveal the inner workings of the advertising industry. After watching Darrin navigate his role as at McMann & Tate Advertising (a shout out to real-life advertising agency McCann Erickson), I grew savvy about corporate sponsorships… like the one that impacted each season’s animated title credits. Bewitched taught me about the precarious nature of client management, and capturing inspiration on the fly. Words and phrases like slogan, Madison Avenue, campaign, and layout boards entered my vocabulary.

This was a romantic comedy about a mixed marriage. Samantha could have confessed to being African American or Jewish or a Muslim. Feeling tricked, Darrin’s antipathy created conflict. Storylines echoed obstacles that mixed couples still face from hostile relatives and suspicious neighbors. Proto-feminist Samantha defied her husband, using her power to right wrongs. Endora critiqued the institution of marriage frequently. The show injected progressive notions into storylines. One episode featured Samantha teaching a lesson to a bigoted client by switching the color of his skin. (Putting the actor in blackface was a cop-out. Showrunners could have had a black actor play the bigot during his comeuppance. But it was a different era.) Via these and other story lines, Bewitched taught me the power of metaphor… and later, I’d learn these metaphors were correspondences in metaphysics.

Bewitched may have ended in 1972, but its magic lives forever.