When I was sixteen I was a card-carrying member of two august clubs: the National Hot Rod Association, and the grandly styled International Plastic Modellers Society. I went to meetings of the latter every month. On Saturday afternoons I also took a 40-minute bus ride to a hobby shop in downtown Winnipeg where the proprietor, Bill, let us assemble plastic models in the basement below the retail space.

By then I had been constructing detailed polystyrene replicas of cars and planes for five years, with Testors glue and paint fumes enveloping my small work space. Enrolled in a serious grease-monkey auto shop class in middle school, I was grateful that the resident cranker kept us away from real cars and instead let us assemble kits from Revell, Monogram, and AMT over a big shared table. Thus Don “Big Daddy” Garlits and his Top Fuel dragster, the gorgeous gull-wing Mercedes-Benz 300 SL, a Bullitt-style fastback Ford Mustang, and my favourite, Rommel’s Rod, a souped-up German desert-campaign halftrack with a skeleton field marshal in back (what?!).

Down at Bill’s Basement, meanwhile, I was a serious historical perfectionist. The meticulous Japanese Tamiya company was our lodestar, and learning small techniques like how to make a 1/24 scale jerry can look dented, or to depict weather-beaten skin, occupied us. As an air force brat, I wanted the markings and details on my F-86 Sabre or P-2 Neptune to be perfect. My father, then a flight lieutenant in the RCAF, gave me for Christmas one year a beautiful P-51 Mustang model at 1/48 scale. It had spring-loaded bomb releases and a sliding canopy, plus the need for an airbrush paint job I could never get right. 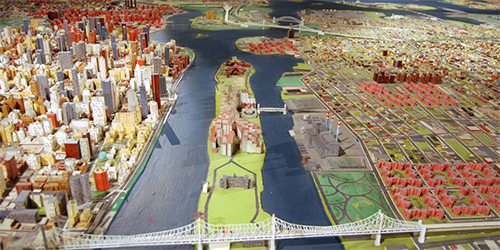 Modelling replicates the world at scale. The New York Panorama at the Queens Museum, commissioned by Robert Moses for the 1964 World’s Fair, joins the Shanghai Urban Planning Centre and the Sydney Customs House as among the largest city-based scale models in the world. Once at the Empire State Building I was stopped at security because I had, in my bag, a three-foot model of the building, complete with syringe-like spire and King Kong. “Come on, man,” one guard said to another. “It’s just the building.” 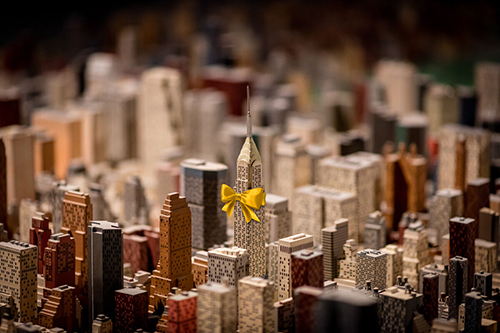 But at a certain point even the most dedicated modelling perfectionist is tempted to go off-book and let their creativity run wild. The most satisfying thing I ever learned about small-scale construction was in an art gallery, not a hobby shop. The Canadian artist Kim Adams is famous for “kit bashing” sculptures and dioramas. That is: take two or three kits, throw away the instructions, and then just build something. How cool is that? Personally, I wish I still had the little velociraptor model I fashioned, with tailwings attached on the flanks and a jetplane pilot dropped inside a square I’d carved out with my X-acto knife. Or the Russian infantryman I modified into Tatooine-era Luke Skywalker, with a long-barrelled blaster that started as a sniper rifle. Not gallery art, sure, but maybe the best of these many little nerd-worlds.