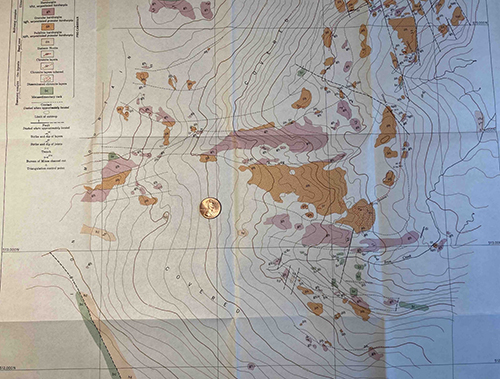 The maps—some of them enormous—are tucked into pockets or envelopes attached to the inside boards of books with titles like Geology of the Grey Eagle and Some Nearby Chromite Deposits in Glenn County California (published by the Department of the Interior at the United States Government Printing Office, 1944), Chromite Deposits in Central Part Stillwater Complex, Sweet Grass County, Montana: Geological Survey Bulletin 1015-D (Government Printing Office, 1955), and Deep Wells of Nebraska: Nebraska Geological Survey, Bulletin 4, Second Series, 1931). For someone of my generation these books and pamphlets conjure artifacts from unmade, imaginary episodes of The X-Files, or the obscure small print on the back of a worn copy of an VHS tape from the early 1980s, or a piece of mail delivered, years late, from the dead letter office.

The fold-out geographical survey maps that come with many of these books are so intricate and detailed and obsessively precise in their design, so unlike any other form of printed material. The maps, during a dark time of my life, helped shore me up against a deep and seemingly bottomless sadness. Because, late at night, when the worst angels of thought seemed to perch at every neural connection, switching every good thought into its opposite, the maps, unfolded and spread out on my office desk or floor, offered me a respite from, well, from me. There, in the color-shaded boundaries and arcane labeling of chromite layers, granular harzburgite, hornblende schist and amphibolite, and weisner quartzite I discovered an alien mental landscape into which I could, temporarily, escape. 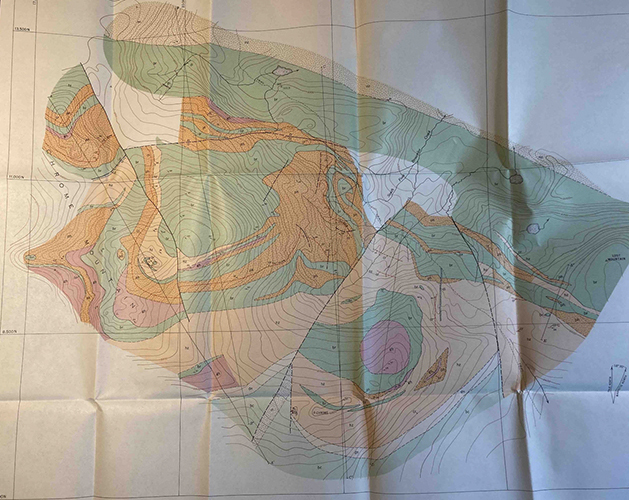 The power and pull of the maps today is that they were not created to be art, which lends them a super-charged, ambiguous aura. They were designed, carefully, to be of practical use, although the fact that so many of the books (most of which I’ve purchased from used book stores and eBay) appear never to have been cracked open makes you wonder. Or else, maybe the maps that were used in the field, during excavations and mining operations, are the ones that don’t exist anymore, and so what we are left with are the rare unused ones.

Map auteurs, I call them, and their names are listed on tiny print on most of them. The unsung Godards of the geologic cartographic world. The enormous Geologic Map of Alabama, “Engraved and printed by the U.S. Geologic Survey, S.J. Kubel, Chief Engraver and George W. Stone, Editor, 1926.” Or the Montana Stillwater Complex Map, “Triangulated by D.C. Cox.” People, gone and forgotten, who could not have known that their intricate labors of love would, decades later and obscured by time, bring happiness to someone like me, who still spends nights when the darkness comes, tracing lines on smooth paper with his fingers. Thinking about deep, geologic time. And giving me hope that even the smallest, most obscure art that I create today might, if I’m lucky, be discovered by someone someday in the long future and bring them a bolt of happiness, too. 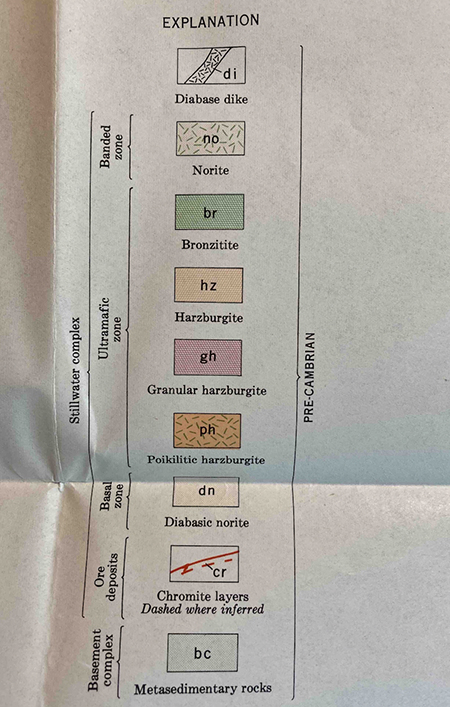 See All Posts by Nicholas Rombes

Nick Rombes is author of the novel The Absolution of Roberto Acestes Laing (Two Dollar Radio) and Cinema in the Digital Age (Columbia University Press). He is an English prof. in Detroit, and can be found on Instagram @rombesn.