Used booksellers are experts on the outsides of books. I often find myself—absurdly, embarrassingly—claiming that I’m familiar with a book because I know where it used to sit on a shelf. Lately I find myself thrilled by the edges of books, the normally blank spots. Like white space on a page, they can be fascinating and fertile.

I’m always wanting to peek at the edges of books, those liminal spaces, forgotten because they are so meaningless and insubstantial that it takes hundreds of pages together to even earn our notice.

What you will find in scrutinizing the edges of books is various: and can include remainder marks: the colored spray of the industrialized remainder mills along the bottom edge, ownership marks: names, doodles, scrawls, random disfigurations, and gilt or sprayed color to protect the (usually) top edge from dust damage.

All of these are relatively common but occasionally you find treasures on the edges. It’s like running into a carefully decorated curb, public art on a road median, or an explosion of careful graffiti on a cement overpass.

Gauffered (or goffered) edges: The edges are decorated elaborately, usually by applying gold leaf and then using an implement (pointillé tools) to dent the designs into the edge. They can range from a sine curve of dots to extremely detailed geometric designs. Some designs involve scraping all the way through the gold and then staining the revealed page edges with color.

Marca de fuego: The rarest of these, they are literally “fire marks” or brands that were applied at monastery libraries in colonial New Spain. A hot metal instrument would burn the marks into the top or bottom edge of the book as an ownership mark. It was common practice from the 16th into the 19th century and a database exists of the different marks used. Because Mexican binding practices and the types (usually religious) books that were thus marked, they almost always appear on books bound in parchment.

Interest in fore-edge paintings seems to have been rekindled recently. Gauffering is sort of expensive given the price of gold, but I’m surprised that we haven’t seen any bespoke marca de fuego companies springing up. If you could find the right blacksmith, I think you could really do well. 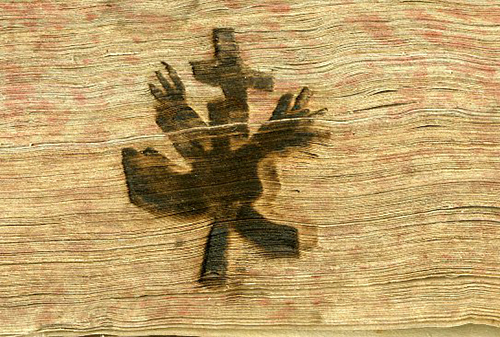