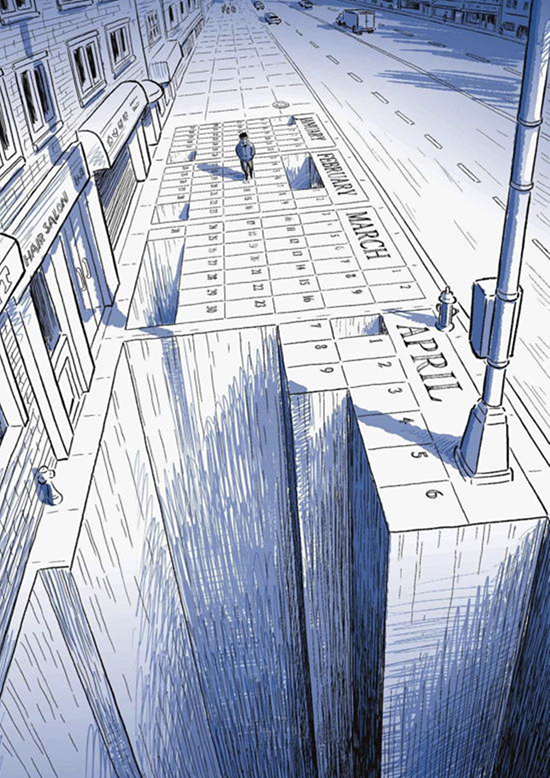 THE SHAPE OF WORDS

I’m going to spoil the most pivotal line in one of my all-time favorite graphic novels — because sometimes knowing how things turn out isn’t the most important point to be focused on, and that’s the meaning of the quote too.

It comes toward the end of writer/artist Scott McCloud’s masterwork (I mean, one of them), The Sculptor (2015). This was the first book with which he followed his definitive series of Understanding Comics studies, wherein he’d spoken in all the medium’s myriad visual vocabularies to decipher its unique conceptual principles and possibilities. Here, he was ready to express a whole new graphic language of his own with what he’d unlocked. Though for me, the most momentous realization came down to a single line of print.

The book’s protagonist David is obsessed with what legacy he’ll leave behind, and in that way, is a kind of unwitting worshipper of death even before he finds himself making an actual pact with death itself: in which he’ll live for only 200 more days, but be able to materialize his visions almost instantaneously and mold matter with his bare hands. As is traditional for such existential bargain stories, he soon finds something — someone — he’d rather go on living for. A sublime anxiety and wistful doom thus hangs over the narrative, with the one character who can see it from both inside and outside being the sculptor’s great-uncle Harry, long-deceased but returned as death’s vessel and a short-term intermediary between David and oblivion. Late in the story, as the Uncle Harry part of him is starting his final fade, he tells David, “Every minute is an ocean. Let them in… let them all in.”

When my wife was diagnosed with a rare and incurable cancer, this line was the first thought that came into my mind, once it was capable of forming any. Our perspective changed with the extreme circumstance, and we had to widen time to make up for the length we knew we’d lose. The life we let in would have to give Lynn as much as she should have had, and last me for the rest of mine. It was a profound compression of our forever, and we learned that this was possible; the ocean fit into a single day, and time could move around us. We got nine months, in temporal terms, but gave each other eternity.

The Sculptor came to me as a kind of premonition; I had happened to be the proofreader for its publisher. So I benefitted from an advance understanding, long before I would otherwise have had the chance, though I didn’t know how fundamentally I would come to need it. I use it still in every day I share with Heather, the love of my second life. Shortly before I decided to write this, McCloud’s own life partner, Ivy Ratafia, was reported to have died suddenly in a car crash. Many might take it as an eerie echo of something that happens in The Sculptor that I won’t reveal, but all thoughtful artists will have imagined ahead to such things, and they flash forward in everyone’s mind. As mortals, we’re all, equally, marked for death, and the most meaningful marks we make are the ones which create beauty for each other in the moment and were not meant to last.

BLURB YOUR ENTHUSIASM: INTRODUCTION by Adam McGovern | Ran Xia on BLACK CROW BELIEFS | Kelly Jean Fitzsimmons on LEFT-CORNER BRICK | Andrea Diaz on JOY IS RESISTANCE | Lynn Peril on TO THINE OWN SELF | Miranda Mellis on THE FUTURE IS PASSÉ | Bishakh Som on LET THE WEIRDNESS IN | Lucy Sante on FLAUBERT’S PERFECT WORD | Stefene Russell on CRYSTAL SETS | Crystal Durant on LIFE IS A BANQUET | Adam McGovern on EVERY MINUTE AN OCEAN | Josh Glenn on LUPUS LUPUM NON MORDET | Heather Quinlan on SHUT UP, HE EXPLAINED | Adrienne Crew on WATCH YOUR PENNIES | Art Wallace on COME ON AND GIVE A CHEER | Julia Lee Barclay-Morton on WILLIAM JAMES, UNADAPTED | Christopher-Rashee Stevenson on TO EACH HIS OWN | Nikhil Singh on ILLUMINATE OR DISSIPATE? | Mimi Lipson on CHEAP FOOD TASTES BETTER | Kahle Alford on NOT GONNA CRACK | Michele Carlo on YOU CAN’T ALWAYS GET WHAT YOU WANT | Marguerite Dabaie on WALKING ON WATER | Raymond Nat Turner on TRYIN’ AND TRANEIN’ | Bob Laine on WHEN YOU GROW UP | Fran Pado on THE SMILEY EMOJI | Deborah Wassertzug on PLACING YOUR BETS. PLUS: Lisa Levy on TBD.