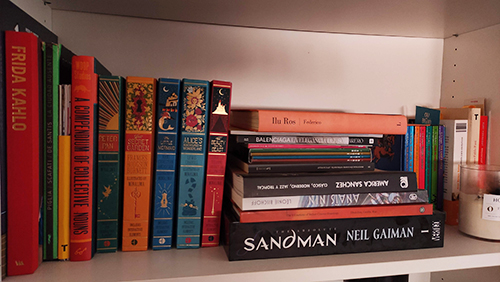 I have to thank those who invented digital books (not only Michael Heart; Spaniards have Ángela Ruiz Robles in high esteem, for example…), but not because I read them. Honestly, I don’t read literature on digital devices, just media, papers and some essays… mainly information and research. Because when it comes to the experience of reading (and those who love it will know what I’m talking about), I need to be immersed in a complete adventure, which is probable the main reason of my obsession with illustrated books.

I’ve loved them since I was a child, but I quickly noticed that this type of books was considered either for children or “second rate” if we talked about comics and illustrated albums. I spent most of the 1990s (I was in my 20s then) trying to find illustrated books that were for adults, or versions of classics with a visual twist. Believe me, it was hard. Nevertheless, being born and raised in Argentina, I was lucky enough to have access to one of the most interesting magazines of the time, Fierro, about illustration/comics/graphic novel — a posh term that we use to point out it’s no longer a “second rate” genre (oh, how do I love semiotics!). I was so haunted by it that I wrote my undergraduate dissertation about this publication… And while writing it, I understood one of the reasons of my obsession: what I love about (good) illustrated formats is that you need both words and images to make sense out of them. It’s pure hybridization, each element contaminates the other in a continuous blending. It’s a like a dance that ebbs and flows, and due to the format of paper books, you can go back and check any fragment of the flow immediately. Books have always been interactive, but illustrated ones ask you to be even more active.

My interest and search for illustrated books did not cease there. Some years later, I was lucky enough to become a writer at a Spanish national newspaper. The pay was not good, but the “press samples” of the illustrated books were heaven. You can imagine my emotion every week, when the postwoman — who already knew my name by then — rang the bell to tell me that she had another heavy pack for me. This went on for some years, and I was able to discover the universe of illustrated books by interviews, visits to different publishing houses, and of course, the books themselves. I was a writer about all this in the moment in which everyone said that paper was dead, that digital books were the future… which was exactly the same moment in which publishing houses understood that unless paper books became a beautiful object in themselves, they were going to lose the battle. And so finally, that’s why I have to be thankful to digital books: they made almost every paper book better, and many of them — even from publishing houses that had never considered this — visual and illustrated.

PS: Some of my recommendations, although I could go on and on…
Libros del Zorro Rojo – Literature illustrated by contemporary artists.
Mina Lima – an explosion of visuals that reinvents literature classics.
Warburg & Beach by Jorge Carrión and Javier Olivares. An accordion book, from literature lovers to literature lovers.
Federico, by Ilu Ros – One of my most recent findings, an illustrated (and carefully researched and written) biography of Federico García Lorca.

See All Posts by Gabriela Pedranti

Gabriela Pedranti cofounded Semiotica Studio, which covers Spain & Latin America, in 2010 — with Ximena Tobi. She has been a lecturer at IED Barcelona since 2005, and from 2014–2018 she was the BA (HONS) Fashion Marketing and Communication Course Leader there. She’s worked as a communication consultant, journalist, and translator/interpreter.