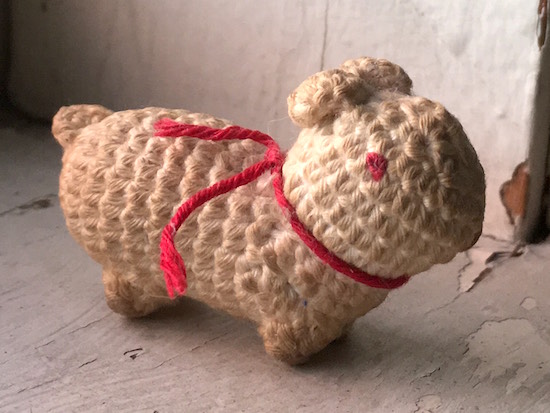 So one time I was sleeping with this guy. We were having a good time, but I couldn’t see much future in it. Partially because I had just broken my heart in operatic fashion and had given up on seeing futures, and partially because this guy was so unlike my usual dark thinker artist type. He was young, a bit wild and uncouth, only lightly educated, and totally hot. It seemed like a good bet for the short term. My plan was for this to be the first in a long series of passionate affairs befitting my new status as a Total Player. Then he brought me a present. Something he’d lifted from Value Village. He had dug around in one of those mixed bags of odd toys and brought me a small grubby crochet sheep. Dirty white with little red thread eyes and an unraveled red thread bow. It was frayed and melancholy and only slightly hopeful and right up my alley. This man’s presentation of this object made me look twice at him. It was when I first realized he might understand me better than I thought.

I was on tour most of the time in those days, and the sheep came with me. At some point we named it LuckyLuckyLuck, which some nerds will recognize as a quote from Blackadder Season 3. The idiot prince falls into a little vortex of the word “lucky”, repeating it into nonsense. I do feel lucky in my life. I also think that’s nonsense. But I’m grateful anyway. I ended up marrying that guy. A friend drew LuckyLuckyLuck for our wedding invites. For our first anniversary (paper anniversary!) we went recklessly ahead and got tattoos of that drawing. So now LuckyLuckyLuck stays at home but comes with me everywhere. I’ve picked up the original sheep while writing this, for the first time in a while. It still works.

See All Posts by Veda Hille

Veda Hille has released 20 albums, the latest being Love Waves (a collection of love songs written in Berlin, released 2016). Her most recent musical Onegin, an adaptation of the Russian classic written with Amiel Gladstone (premiered 2016), won an unprecedented 10 Jessie Richardson awards.