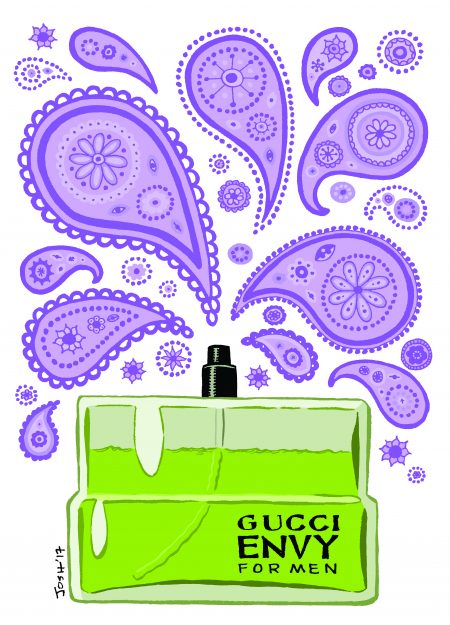 As a twelve-year-old boy, I wanted a bottle of Gucci Envy, a fragrance for men. Like most pubescent desires, this one was driven by a grim fixation on belonging and sex. Also, the cologne was lime green, and I thought that was neat. I made such a stink about it that I got it for Christmas: a squat, boxy phial with a thick black lid that fit into place with a satisfying click. It smelled like a rich man with sculpted abs.

But now that I had it, I saw I was fucked. Wearing it would attract attention — that was the point — and I tried to elude notice at all times. To have a detectable fragrance was to risk being called a fag and punched in the arm. Still, I put it on. I had a smell.

Fragrance enthusiasts like to speak of sillage, the degree to which a perfume lingers in the air when you wear it. I didn’t know this word, but I knew, on the bus to school, that I was enshrouded in Envy. In the cafeteria, my big friend took a seat next to me and reminded me that I was small. “Are you wearing cologne?” he asked, as if I’d bathed in pig shit. I said I must’ve gone a little heavy on the deodorant that morning. My friend called me a fag and punched me in the arm. I swore off Gucci Envy right then and there.

A few years ago, visiting home for Thanksgiving, I rediscovered the bottle, still gleaming with green liquid, in a disused bathroom cabinet. I did what I always do when I recover something old, which is eBay it. Gucci Envy had been discontinued, I learned, and its scarcity made it much sought after. Cologne connoisseurs so valued its delicate top notes of ginger and incense that full bottles now fetched upward of $350. A reviewer on Fragrantica, described it as “one of the centerpieces from the holy era of modern male perfumery.” I had to reappraise my seventh-grade self, who seemed now the paragon of taste and discernment. I took the bottle back to New York and started wearing it regularly.

Only weeks into my Envy regimen, I flew to the Midwest for a job interview with The Artist, whose music was to me so powerfully life-affirming that I’d spent years singing it in the shower and forcing it on friends; his poster hung in my bedroom. I had to present myself perfectly — The Artist, himself so immaculately fragranced that associates often recalled smelling him long after he’d left the room, was not one for second chances. Pacing my hotel room, I put on some Envy in the moments before The Artist’s driver picked me up.

The meeting went well. Back in my room, I did a lot of celebratory high-kicks and applied Envy liberally to the chest and neck. I wanted to surf on a cloud of Envy. I wanted to drive a cologne car down a perfume parkway. By the end of the trip, after a few more meetings, I was in such an ecstatic daze that I didn’t notice when it was time to go to the airport — The Artist had a way of making you lose track of time. I had about negative thirty seconds to pack up and leave. In my haste, I left the Envy on the nightstand.

ABOUT THE ARTIST: Josh Neufeld is a Brooklyn-based cartoonist known for his nonfiction narratives of political and social upheaval, told through the voices of witnesses. Neufeld has been a Knight-Wallace Fellow in journalism, an Atlantic Center for the Arts Master Artist, and a Xeric Award winner. His works include A.D: New Orleans After the Deluge, about Hurricane Katrina, and The Influencing Machine: Brooke Gladstone on the Media. www.JoshComix.com

See All Posts by Dan Piepenbring

Dan Piepenbring is the web editor of The Paris Review.