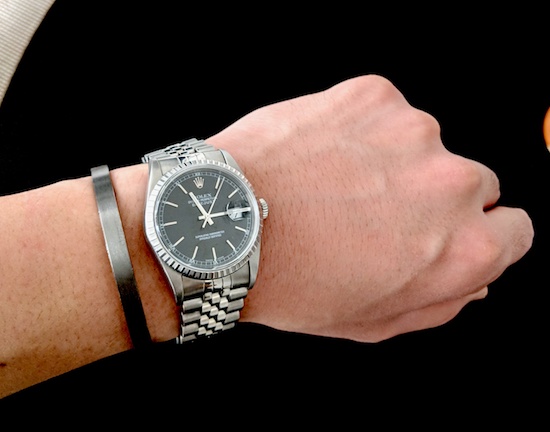 I obsess over finding the Platonic ideal of everything I own and wear; when I find pants or a t-shirt I like, I’ll buy four of them, so that I can keep wearing them until I find a better one. So it’s no surprise that I put maybe 200 hours of thought into buying the first thing I put on in the morning, and the last thing I take off: My 2000 Rolex Datejust. I didn’t think I’d ever be a Rolex guy. In a way, I’m not.

It started with my father’s watch, a Datejust from 1986. For an immigrant like him, that watch was a tangible, unambiguous declaration that he’d made it. A few years ago, he gave it to me unannounced: A package in the mail, no note. I didn’t want it. To me, the yellow-gold and steel screamed “old Asian man’s watch,” but there was more to it than that. By choice, my father and I have been basically estranged for 25 years. I can count the number of times we’ve talked in that time on one hand. So getting an heirloom from him was a strange, uncomfortable experience. I put the watch in a drawer, and told myself I’d eventually sell it and buy a watch I actually wanted.

Last summer, I finally did and that infernal process almost killed me. Watch culture is a vast and unruly forest, whose hidden glens support bizarre micro-obsessions. Did you know that a well-used vintage Rolex GMT Master from the 1960s can command $30,000, while that same watch with a dial faded by UV exposure until it looks melted can run to $120,000? I’m telling you these people are crazy.

In the weeks I spent studying the minute differences between vintage pieces just a decade apart, a funny thing happened. Having looked at literally thousands of watches, I came to appreciate how the Datejust had remained almost utterly unchanged in forty years. They were neither of the past nor the present. And so, after selling my father’s watch, I reparked the proceeds in a watch almost the same, except in white gold.

I’ve never received a compliment on it. People know the watch even if they never think about watches, and a vintage Rolex doesn’t stand for “making it.” But it stands for something nonetheless. My watch is an heirloom that marks a shared sensibility rather than shared sentiment: A conscious decision to buy something that wouldn’t bend to fashion. It marks a connection with my father that I didn’t necessarily look for, but’s there anyway. Even when you turn away from your past, it has a way of finding you all the same.

See All Posts by Cliff Kuang

Cliff Kuang is a journalist and UX strategist, and author of User Friendly, which will be published by Farrar, Straus and Giroux in spring 2019.