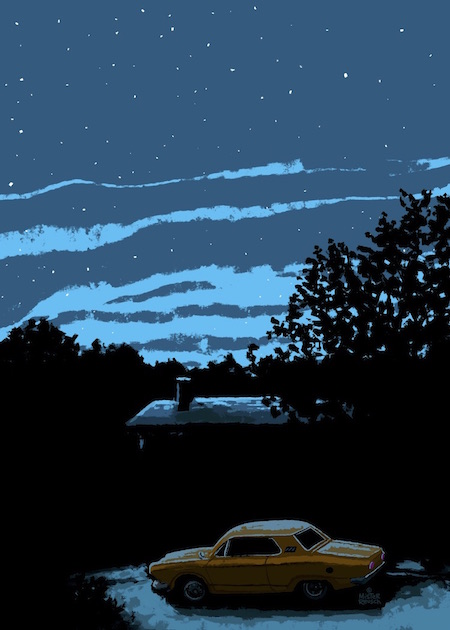 It was the summer of 1984, and I had a plan with a friend to go on an American road trip. I was eighteen, he a few years older. We were both Reed College dropouts, living on opposite ends of the continent. He sent letters from San Jose, where he was working and saving up for a car. “I am now the only, sole, exclusive warehouseman at a furniture store,” he wrote. “I make $5.65 an hour.” But then we had a fight, and he sent me another letter saying he didn’t want to go on a trip with me anymore. Though I didn’t understand it at the time, I was in love with this weird, ecstatic boy! Which is to say: without either of us realizing it, he had broken my heart.

Those were the circumstances under which I bought my 1963 Dodge Dart, with $600 I’d earned waiting tables in Harvard Square. It was a dull, solarized copper color. The bench seats had a pleasant rubbery smell, and instead of a shift lever there was a vertical row of buttons on the metal dashboard that said R-N-D-2-1. I parked outside my house and slept in the back seat for the first two nights, dreaming of two-lane blacktops and Arizona stars. I would be my own Neal Cassady. Except that I didn’t have a driver’s license, which meant that my older brother had to register the Dart for me.

I kept the radio tuned to a station that played music from the time of my car’s youth: the Dixie Cups, the Chordettes, Roy Orbison, Dick and Dee Dee. I began wearing cat-eye sunglasses and pedal pushers. One afternoon I was backing out of a spot at the supermarket, lazily turning the wide steering wheel and singing along with the Everly Brothers (When I want you, all I have to do is dreeeeam), when, CRUNCH!! The Dart’s bumper, heavy as a cast-iron frying pan, had accordioned the front quarter panel of a passing Monte Carlo. A stack of small bills exchanged hands the next day, and I agreed with my brother that it was time to start studying for my driver’s test.

I had my Dart for a couple of years. It should have lasted longer; there were only 60,000 miles on the sturdy slant-6 engine when I bought the car. It’s my great shame that I didn’t take better care of it. By the end, the transmission was slipping so badly that getting into reverse meant punching R and gunning the engine with one leg out the door, Barney Rubble style. One morning I found that a car thief, disgusted and enraged by an attempt to back the Dart out of its parking spot, had driven it into a tree and slashed all the tires and seats. I sold the car for scrap. My heart was no longer broken, and besides, I thought this world would always be full of $600 Dodge Darts.