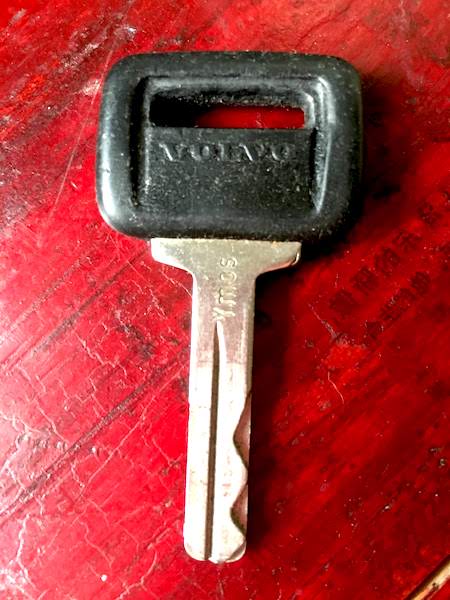 “Hello, old friend.” Had I said this aloud or just thought it? It was 3:30 in the morning and, restless, I decided to dip my toe into the alleged life-changing magic of tidying up by starting with a desk drawer. There was the key. And even before I’d run my fingertips along its five, crossword solution letters — V O L V O — the long-forgotten story of my getaway was all I could think about.

It was the summer when I knew my marriage was ending, and my car was dying, too. My mechanic handed me the key, its well-worn, side-milled steel cold in my palm. This was before car keys were tiny remote controls in our pockets. When a car key had a little heft to it, was something to turn so that the ignition would too. “It’s time,” was all he said.

About a half dozen times before that, when I’d wheedled yet another of his discount voodoo fixes, he’d gone along. But with the last one had come his Do Not Resuscitate order. I took it hard. Owing to a student year in Paris and to the lingering throb I still felt because of that golden, revelatory moment in time, I’d been insufferable enough not only to have named the car, but to have done so in French. I’d even sprung for the vanity plate: FOLIE. As in, mania. As in, mad about this old box of a car, my first.

I was the third owner but had put the most miles on the car. The odometer read 85,000 when I bought the big black sedan with a $7,000 bank loan. At its time of death, the car had traveled nearly 300,000 miles more. They’d been my freedom miles, my courtship miles, my first job as a reporter miles. I’d driven to my own September wedding in that car. Now, as with the man whose perfect mixtape was still in the dashboard cassette player, I braced myself for goodbye.

I donated the car to a charity. It seemed a dignified if defeated end, to be towed away to do good. I left the car’s papers and one key in the glove box. The other key, I kept. At the time, I couldn’t say why.

That fall, after the movers had come, I came home to a blinking answering machine. It was the chief of police from a distant town. I assumed it was a wrong number, but she called back, asked for me by name. Did I own a 1988 Volvo? Did I have money troubles? Had I recently been down her way? There’d been a spate of bank robberies. My name was on the registration found in the getaway car. The robbers had gotten away.

It wasn’t until that moment that I realized that I had gotten away, too, and that I’d kept that key as proof.

See All Posts by Kelly Horan

Kelly Horan is an author and the host and senior reporter and producer of Last Seen, a podcast from WBUR and The Boston Globe about the Isabella Stewart Gardner Museum heist, coming September 2018.