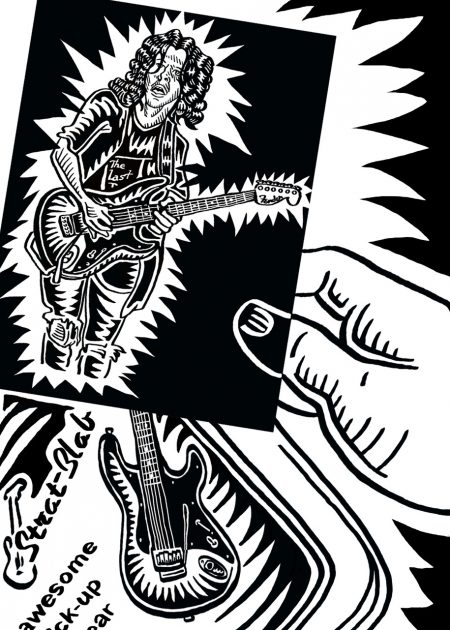 June 1990: the summer before my senior year in college. I returned to my childhood home exhausted and depressed after a spring studying in France and bungling through Europe. I’d alienated a host family in Tours and close friends in Budapest, been hassled by Greek police and Hungarian border guards, had my heart broken in Oxford and Bruges. I’d fled the continent a few weeks early, so I still had a few hundred dollars left. Thus was I primed — emotionally, spiritually, neurochemically, and financially — to seek salvation at Sam Ash Music in White Plains.

A Fender Stratocaster, new-old-stock, marked way down. Tobacco Burst finish, rosewood fingerboard. A curious suite of features I’d never seen on one Strat before: two single-coils and a bridge humbucker, plus a coil-splitting switch and a Kahler Spyder locking tremolo. Gloriously meaty-quacky-junky-shrill tones. And the neck! It felt like home the moment I picked it up.

Reader, I bought it.

I spent the summer practicing three or four hours a night, slowly evolving from a clumsy amateur into an enthusiastic (if limited) pentatonic wailer. Understand: this kind of commitment was unprecedented. But plugging in and playing this guitar begat joy, and joy begat focus, and focus begat progress, which begat more joy, and so on. I felt like the best version of myself that I’d ever been.

Five years and a couple hundred gigs later, a house I shared with four friends in Palo Alto was burgled. My Mystery Strat, my maybe-one-of-a-kind Axe of Best Self: it was gone, I would never hold it again, and that hurt like hell.

Here’s the thing, though: I think I’ve found it.

Last year, on a writing deadline, I decided instead to go online in a quest to ID my old guitar. Eventually I found an image of it on a Strat-enthusiasts site where people posted photos of their herds and talked shop at a level far over my head. I messaged the owner: where’d he get it? Had he ever seen another like it? What’s the model called, anyway? (On eBay a few years ago; no, never; nothing, it’s a hodgepodge of Japanese and American parts Fender slapped together while clearing factory stock in the late ’80s.)

Is it the same guitar? I say yes. Even if it isn’t, it’s a close enough match that I can choose to believe it is — which feels very nearly as good, and so I will, and do.

He sent me updated photos of what it looked like since he’d modded it with new pickups, new nut and tuners, other tweaks here and there — which, I’ll admit, stung me. At least he hadn’t swapped out the neck. O, that neck! I told him to email me if he ever wanted to sell. He said he could only sell it for “more than it’s worth.” And I thought about that summer-of-’90 kid, full of joy and purpose and nascent musical fearlessness and fumbly half-learned Blackmore and Clapton and Stevie Ray licks.

I don’t have that kind of money right now, I said. That’ll take a while.

So I don’t have it (almost-certainly-it) back, but I do know where it is, and I know it’s being appreciated by someone who knows his guitars and is likely ten times the player that I ever was. That’s almost as good. Almost.

ABOUT THE ARTIST: John Holbo is an associate professor of philosophy at the National University of Singapore.

See All Posts by Doug Dorst

Doug Dorst is the author of two novels, the New York Times-bestselling S. (with J.J. Abrams) and the PEN-Hemingway-nominated Alive in Necropolis, as well as a story collection, The Surf Guru. He teaches in the MFA program at Texas State University.