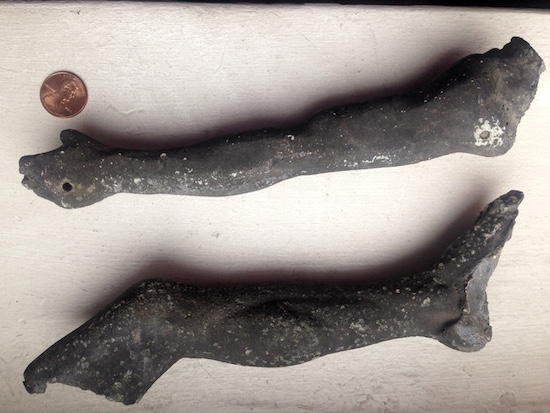 When we were living in Prague in 1992, I stole something from an old graveyard that had fallen into disrepair: a cast-iron arm and leg, sinewy, from a religious statue, perhaps a Jesus. I was walking with my boyfriend, wearing a grey wool coat, we were living there, we were young. This arm and this leg were just lying on the ground, fallen from a tombstone perhaps. It seemed like they were waiting for me.

I knew it was wrong. But I wanted their cool metal, I wanted their beauty, their brokenness, I wanted a piece of history and a marker from a time in my life. Also, maybe, I wanted to rescue the arm and leg from the arbitrariness of their fate — being cast off, forgotten.

This was an old graveyard, one in which poets and artists whose aesthetics were considered “bourgeois” were buried. This graveyard and all who were buried here had been ignored, purposefully forgotten, maybe even considered enemies of the state, by the ruling regime.

I brought the arm and leg back in my suitcase, wrapped in clothes.

When we returned from Prague, the metal arm and leg were among my most prized possessions. I displayed them proudly on the windowsills in our various apartments. Every so often someone would see them and say, what are those? And I would explain. “Creepy!” they might say. And I felt proud — they were to me a kind of rebellion.

A souvenir. Je me souviens. But what did I remember? A grey sky, a cemetery, my boyfriend, my anger at death, at accidents of fate, perhaps all of history, maybe time itself.

Still, they reminded me of my romantic idea of myself. Hadn’t my desire given these objects back their dignity? Hadn’t I reclaimed them from history? How bold I seemed for having saved them!

At some point, maybe when my daughter was born, I looked at these broken metal limbs taken from a country that now had a different name, and my glee that I had gotten away with something evaporated. When I looked at this arm and leg — inert, cast off, implacable — blood rushed to my cheeks. They struck me now as evidence of a kind of arrogance on my part. It was a particular greed that came from being young and wanting to be bigger than, outside of, history.

We had by then leased a blue-doored storage locker in our building’s basement. I took the arm and leg from the windowsill and wrapped them in a sarong from Indonesia — which I had swiped from a Balinese hotel on that same long trip. Standing at the door of our basement locker, I placed these tightly wrapped metal limbs deep down in a box my husband had labeled “sentimental.”

See All Posts by Sari Wilson

Sari Wilson is the author of the novel Girl Through Glass (Harper, 2016).