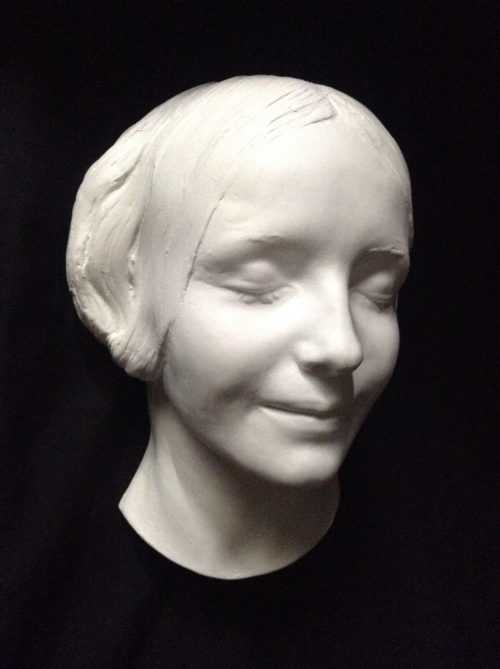 On the wall of my living room, visible to passers-by on the street below, hang four dozen plaster busts of famous dead people. They mostly come from an age before photography, when the best way to capture a celebrity’s likeness for posterity was to create a death mask. Among my collection are Franz Liszt (and his forehead wart), Friedrich Nietzsche (with his bushy moustache that must have been a beast to plaster), and Benjamin Disraeli (to whom I have posthumously awarded a yarmulke). Now, you might object that these objects lack any Benjaminian “aura,” as they are all nth-order copies of copies of copies of…. Well, yes, but at the end of that chain of reproductions was the dead flesh of Beethoven, Bentham, and Burr. And so these busts connect me directly to those great men’s last superterranean moments. There is only one woman on my wall, the nineteenth-century opera diva Maria Malibran. My collection lacks the one mask that ought to have been the easiest to come by, for it is undoubtedly the most copied death mask in history.

In the late 1880s, the body of an unidentified young woman, an apparent suicide, washed up on the banks of the Seine in Paris. The mortician who tended to her body was supposedly so taken with her beauty that he cast a surreptitious mold of her face. Somehow copies of the death mask of l’Inconnue de la Seine began to proliferate across Paris, appearing first in the city’s salons and ultimately in its literature. Nabokov wrote a poem about her. Rilke mentioned her in his only novel. Man Ray photographed her. A character in Louis Aragon’s novel Aurélien tries to resurrect her. She’s pretty enough — but hardly a “drowned Mona Lisa,” which was how Camus described her. But then, the Mona Lisa was hardly a Mona Lisa. In 1958, when the creators of the CPR mannequin “Rescue Annie” needed a head for their doll, they chose the Inconnue; as a result, it is said that the poor suicide’s face has now become “the most kissed” of all time.

Over the years, as my collection of death masks grew, the Inconnue has continued to elude me. Second-rate casts make an appearance on eBay now and again. A sculptor outside of Paris offered to sell me a copy for an exorbitant fee. My search for the unknown woman goes on.

See All Posts by Josh Foer

Joshua Foer is the author of international best seller Moonwalking with Einstein, co-founder of Atlas Obscura and Sefaria.