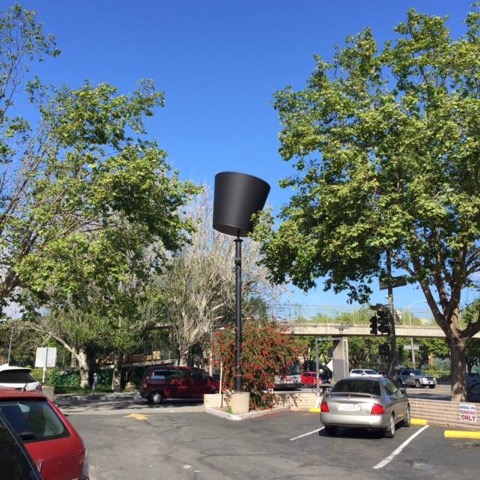 I was on my way to a mean scrub-down at a Korean spa in San Francisco when I first laid eyes on it. Emerging from a dirt patch near a runty oleander bush on the parking lot’s edge was a thick metal pole, painted matte black, rising into the weak light of the foggy morning. And there, atop the pole taller than the traffic light, loomed an oversized Kentucky Fried Chicken bucket, a lodestar of my youth in the suburbs, fully murdered out in the same matte black.

The sight stopped me in my tracks. Never in my life had I encountered something so simultaneously ominous and absurd, so menacing and ridiculous. It was like the Catholic Church or a serial killing puppet. It was like getting slapped in the face with a rubber hand. So deep was the bucket’s power that it didn’t make sense to me that, at that moment, I was the only person on earth looking at it. Did anyone else see it anymore? (Was it even there?) I paused a second to check if it was revolving, but it was completely dead.

Minutes later I was inside the scrubbing den, having joined the rows of naked women lying face up on metal tables like corpses in a morgue. Though it felt like a layer of my epidermis was being grated off and hosed down a drain in the floor, all I could think about was the audacity of that bucket. It presides over us, thinking it’s in stealth mode, fronting all black ops, trying to erase history without caring if we believe it. It mocks us. It shuts us down. It refuses to answer. How dare it.

See All Posts by Beth Lisick

Beth Lisick’s first novel, Edie on the Green Screen, comes out in 2020.