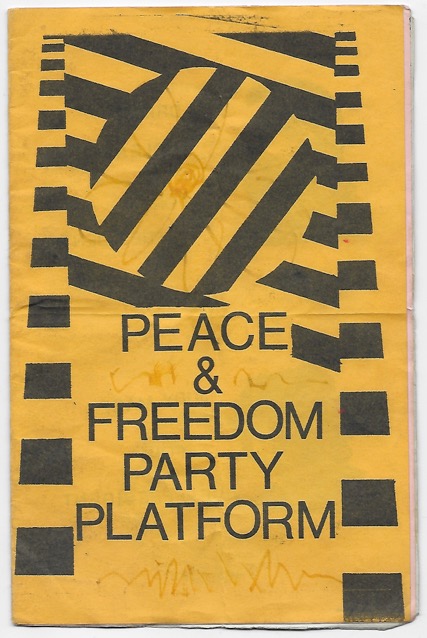 In the fall of 1968 I was presented with a dilemma: Peace and Freedom, or Freedom and Peace? I was 14 and had just started high school in New York City, an hour-and-a-half commute each way from my home in New Jersey. I had only just become political. The events of May had somehow evaded my pubescent attention, but over that summer I had gleaned enough to judge that Eugene McCarthy — “Clean Gene,” the leading antiwar presidential candidate since Robert Kennedy’s assassination in June — was too soft, insufficiently antiestablishment. I’m not certain how I formed this opinion.

High school presented me with a surprise: fierce debates with classmates who were pro-war and read the National Review. I had to bone up. Providentially, daily entry to NYC gave me sudden access to the full range of print media, including underground newspapers, which generally cost a quarter and were available at most stands. My researches led to my dilemma. Would I support Dick Gregory, the former stand-up comedian who wrote From the Back of the Bus (assigned in Freshman Theology), on the FPP ticket, or PFP candidate Eldridge Cleaver, the Black Panther who wrote Soul on Ice (which would be assigned in Theology the following year)?

I decided to visit Gregory’s headquarters and perhaps volunteer. Back in New Jersey I had often volunteered for local campaigns. It was fun, even if I had zero idea of the issues involved — I loved buttons and bumper stickers. From somewhere I got the notion that Gregory’s headquarters were on 125th Street. Didn’t have an exact address, but I’d be sure to spot it. So I headed up there after school, wearing a jacket and tie — it was a Catholic institution — and carrying a Samsonite briefcase. I kept not seeing the headquarters as I walked the long blocks, so I asked people. One man said: “You see that green awning over there? It’s right past it.” I actually didn’t see any green awning, and still didn’t a block later. Another man told me it was over by that blue car, but there were many blue cars and it wasn’t near any of them. A third man assured me it was actually up on 138th Street, but by that time I was tired and felt conspicuous and silly.

I remember eventually telling people that Cleaver was my candidate. I guess he seemed the more radical of the two, and although it would be years before I heard of Flaubert’s law of scansion, I must have thought that “Peace and Freedom” flowed better than “Freedom and Peace,” which was after all a breakaway faction. In any event, I possess literature from both campaigns. Who decorated the PFP platform with red daisies remains a mystery. And where did I get them? Did I visit Cleaver’s headquarters in Chelsea? And did I eventually find Gregory’s, which were more than five miles south of Harlem, on Broadway just below Union Square?