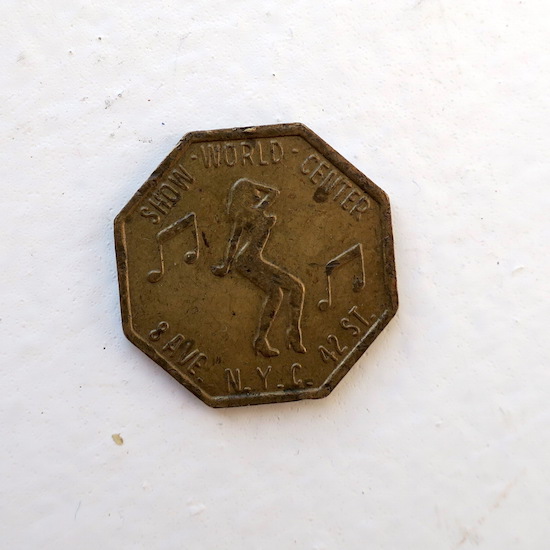 When I was around thirteen, I used to visit my young uncle in his East Village dump. On one of those odd nights, he was stoned and manic, sketching mad inventions. Around midnight a little subway earthquake edged his boombox off a shelf and shattered it. Nothing in his world was possible without music. So we got in his VW bus and drove to Times Square.

It was a marvel. Wonderful, dodgy, and never dark. New York was a different place then, and the center of it was Times Square. By the light of dirty neon, for decades, and famously, the night city vibrated with peep shows, strip clubs, sex shops, blue movies, hustlers and hookups, cheap electronics and an aura of uncensored possibility, of sexuality let loose and relished. I had never been there after hours before. Bodies, cheap commerce, noise, misery, joy, all of it palpable. I tingled with the whole great electric, throbbing energy of it. We got the new radio, but forgot the batteries. My uncle pulled over again and I hopped out, ran into a fluorescent-lit store and bought them. I felt utterly wild, alone in a flashing, raunchy world with a handful of cash. He was watching me the whole time, and I was never more than 20 yards from the van, but it was wild still.

Pleasure is unstable, and when you mix prime real estate with the political will of a moralizing mayor, pleasure loses. In 1998, many years after my initiation, Rudy Guiliani enacted a ban on sex-related businesses near homes, schools, churches, and each other, which is to say, almost anywhere in New York, and especially Times Square. Bullies make good on their promises; he wasn’t fucking around. Rudy wanted Disney and Old Navy, and eventually he got them.

Guiliani didn’t care about the girls, he cared about “quality of life” and sweeping the scum off the streets. In fact nobody really seemed to care about the girls. I’m guilty too, building my imaginary, libertine paradise on their work, these token girls.

What this token bought was a peep. The girl on the gold octagon dances, an object like the thing itself. But those jaunty musical notes make it seem to me that she is dancing for her own pleasure. I’m not saying the girls stripped for their own thrill or that they didn’t. Only that even in the slapdash iconography of the place, the idea was that everybody gets their rocks off here. And that may have been a fiction, but it was the brilliant, animating fiction of the place.

This token was a gift from a friend in the night city’s waning days. I never walked through the doors of Show World, or Peep World, or any such place, but I felt their loss all the same. I wanted to live in a city that loves sex. Not a prude city, not a sanitized, corporate city. Not a repressive, repressed, moralizing grid. What a libertine wants, more than anything, is liberty.