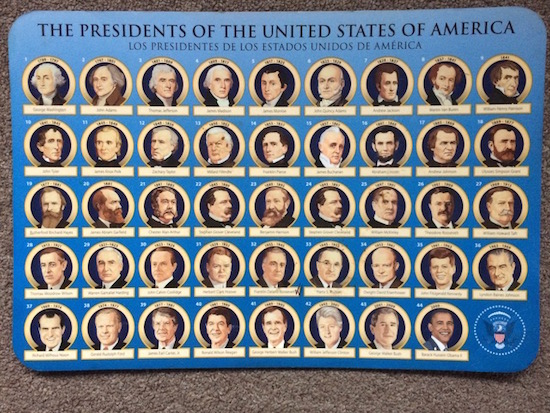 It was the 2012 election, Obama vs. Romney. I was cooking eggs. My daughter, Nora, then 5 years old, entered the kitchen. NPR was probably on the radio, and Nora was probably wearing her green-camo cargo shorts.

Seemingly out of nowhere, Nora asked, “Daddy? Can a girl be president?”

Her question took me aback, but it shouldn’t have. It was a totally reasonable thing to wonder given the data around her. NPR was likely playing clips from the campaign trail, two men making pronouncements. And then there was her placemat, “The Presidents of the United States of America.” It’s since been retired, but I dug it up recently. It’s a flimsy, laminated rectangle with portraits of 44 men in rank and file. In the lower right corner, the presidential seal holds a place for then-unknown number 45.

Where did the placemat come from? Kmart, I think, via grandma. It’s made in the U.S.A, and it’s bilingual. On the back there is trivia: “Tallest (El mas alto). Shortest (El mas bajo).” (Lincoln and Madison, respectively). Scanning the faces now, I notice some other patterns. Facial hair is thick from Grant through Taft, but scant before and after. No one smiles until Kennedy. Clumps of Nora’s dried spaghetti sauce still spatter the faces of McKinley and Fillmore.

I remember Nora studying the placemat back then, and asking my wife and me about individual presidents: “Was James Knox Polk a good president?” “Was Martin Van Buren a good president?” I remember saying mostly, “I’m not sure.” Next to Franklin Delano Roosevelt’s portrait, though, I now see two thick, black check marks in Nora’s hand. We must have given a clear answer about FDR.

And I think I gave Nora a clear answer about whether a girl could be president, but she might have been confused by my reaction — by the slight pause before I answered and by my quick, surprised laugh. To me, the laugh was full of love for her innocence and wonder at the world before her. And it was a reaction to the small shock of truth revealed in her question — the space still remaining between the actual and the possible.

Nora wouldn’t have sensed me considering, for an instant, that the answer I gave would inform her beliefs about herself and the world — another data point to put alongside the Presidents Placemat.

See All Posts by Rob Baedeker

Rob Baedeker is the author of several books with the Kasper Hauser Comedy Group, including SkyMaul, and, with Chris Colin, of What to Talk About.