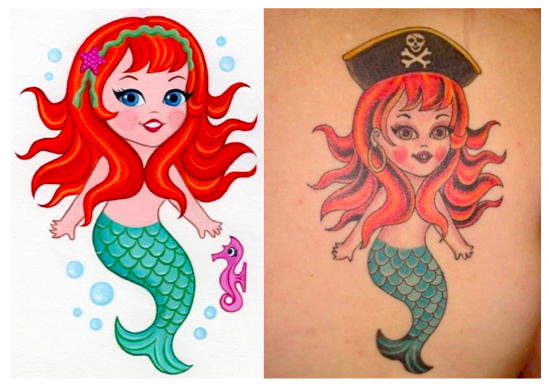 I was living in CA and had asked artist Lisa Petrucci in WA if she had ever drawn a mermaid as part of her Kickass Kuties series and she sent me a jpeg right away! She said that it was funny that I should ask, because she had recently drawn one for a friend…

I emailed her mermaid and pirate Kickass Kutie jpegs to a tattoo artist in NJ, because I was headed there on vacation to visit my bestie, Deb, and asked him to draw me a piratemermaid, or better yet, a vampiratemermaid! And what he created was amazing!

I got her on a Thursday in Neptune, NJ from Dave Shoemaker @ Neptune Tattoo. The next evening, Deb and I went to one of Angie Pontani’s holiday burlesque shows in NYC at the Corio Supper Club. We didn’t have tickets but the doorgal said that she could squeeze us in… and boy did she ever, sat us with another couple at a table the size of an LP! Needless to say, we got to chatting with them and the guy shows me his Bettie Page mermaid tattoo; she had passed away just days ago, so I asked him if he wanted to see my mermaid tattoo that I had just got the day before. When I turned around and slipped my shirt off of my shoulder, he said “WOW, that looks JUST like Michelle’s tattoo!” He calls her over and sure enough, she is the friend of Lisa’s that my tattoo was based on! What are the chances?!

We were both pretty freaked out and kinda ran in opposite directions. Then Deb and I ran off to Manitoba’s to get Ernie’s pic taken with Handsome Dick Manitoba. (Ernie is a little hand puppet that Deb and I have had famous people pose for pictures with for the past twenty years.) Handsome Dick was game, as most people are, and when I turned around, James Gandolfini walked in the door, so I asked him to pose as well. He shrugged his shoulders in his best Tony Soprano way and stuffed Ernie in his mouth for the pic. 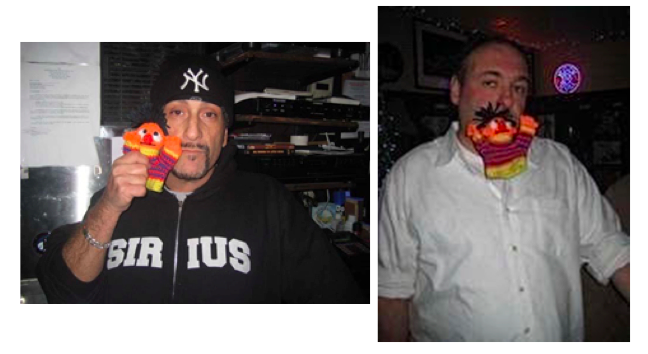 See All Posts by Jenn Mehm

Jenn Mehm is an artist and mermaid living in New Jersey. Having created both the Sacramento, CA Promenade of Mermaids and the Asbury Park, NJ Promenade of Mermaids, she has traded in her tail for sea legs, and is currently documenting her exploits through journaling and collage.