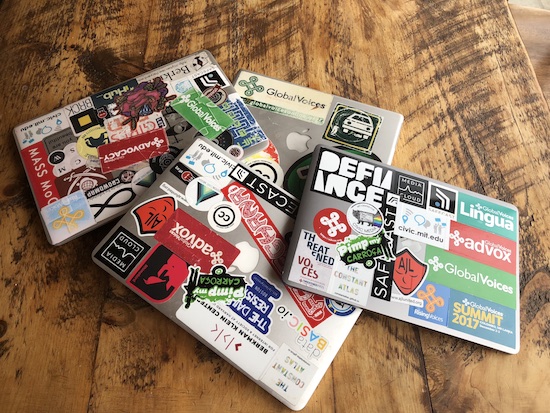 For years, a dear friend and I traveled together to tech conferences around the world. In a parking lot in South Africa, we saw a sign warning us not to back over the penguins that roamed the area: a green road sign with an iconographic car backing over a supine penguin. I took a picture, had it made into a laptop sticker, and the two of us sported it proudly, a two-person club, an inside joke that we invited the rest of the world to ask us about.

Geeks decorate their laptops. The artsy ones buy full wraps, giant stickers that turns the back of the screen into a single, coherent image. But most of us treat our laptops as early 20th-century steamer trunks, accumulating stickers that show where we’ve been and what we’ve done.

The producers of The Fifth Estate, a film about Julian Assange and the origins of Wikileaks, called me to clear the use of the Global Voices logo in their film. I assumed it was for a scene where Assange pitches his new project at the Global Voices summit in Budapest (strange, but true), but what they really wanted was to ensure his laptop could sport a Global Voices sticker. They also featured a sticker from Noisebridge, a legendary hackerspace in San Francisco, which led to a great exchange between Sony’s lawyers and the Noisebridge anarchists. Say what you will about the film (and most of what’s been said about it wasn’t flattering), the producers understood that laptop stickers are badges, affiliations, and signs of belonging.

I go through laptops quickly, and there’s a brief period with a new machine where it’s pristine and shiny. I consider briefly whether this is the one I’ll finally leave undecorated, but six weeks in, once I’ve concluded I’m not going to return the machine, the base stickers go on. The MIT lab where I work. Different projects from Global Voices, the online journalism community I helped found a dozen years ago. Stickers for each of the projects my grad students work on, because they’ve learned that printing stickers turns an idea into unalterable reality — stick it to your laptop, and you’ll have to stick to the task.

Most of the projects represented on my stickers are ones I advise or helped found, but not all. Atop the base layer are stickers from especially cool projects I’ve encountered — my most recent is Pimp my Caroça, a Brazilian project that helps make wastepickers more visible by connecting them with local artists and community volunteers who paint their carts in bright colors. I met Mundano, the amazing artist behind the project at a conference in Denver, and we exchanged stickers so we could fly each other’s colors.

I try to put on stickers only when I can explain the project I’m representing and, preferably, introduce someone to the founder or chief executive. Laptop stickers are a calling card, an invitation to have a conversation, and I want to hold up my end of the bargain. To do otherwise feels a little like wearing an insignia I’m not entitled to.

See All Posts by Ethan Zuckerman

Ethan Zuckerman directs the Center for Civic Media at MIT and teaches at the MIT Media Lab. He lives in western Massachusetts and the aisle seat of airplanes.