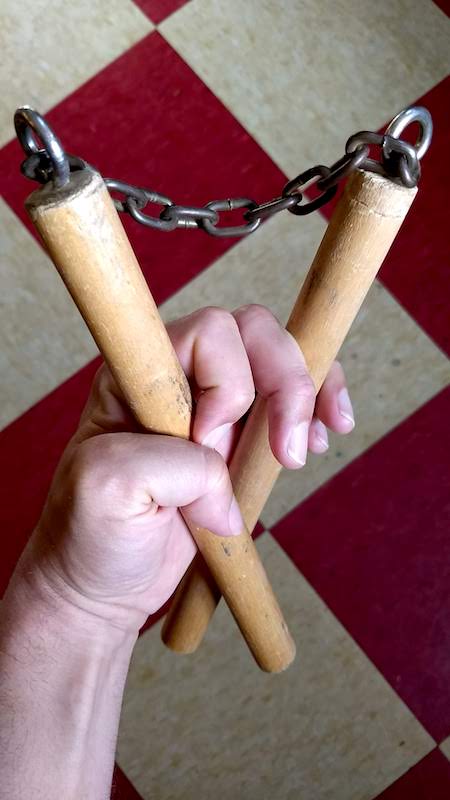 When I was about 12 years old, I made a pair of nunchuks. I used a handsaw to cut two equal sections of an old broom handle, and I went to the neighborhood hardware store a few blocks from my house and got a short length of chain to connect them.

I asked the guy at the hardware store to attach eye-screws to the ends of the chain, because I couldn’t figure out how to bend the metal myself, and he agreed — never asking me what it was for. He seemed encouraged to see a solo 12-year-old working on a hardware project. I was surprised that the chain and eye-screws only cost a couple bucks.

I came back later to see if he would connect the screws to the broom handle pieces, and he looked me in the eye and said, “I’m not making you nunchuks.” So I went and did that part myself.

My interest in nunchuks came, as most kids’ did probably, through the Teenage Mutant Ninja Turtles, and later a stack of magazines called, I think, American Ninja, at the local public library, in a bin on the “pre-teen” shelf. I read articles about how to sneak silently up creaky stars, and fantasized about buying the advertised swords and throwing stars.

I never actually ordered a weapon with a blade — which would come in the mail and I’d have to explain it to my parents — but the nunchuks were very real. They were light enough to whip around fast but heavy enough to hurt. It never occurred to me to try to put padding on them.

At some point my mom found them and I got in trouble, but they weren’t taken away. I had to promise not to “use them on anyone.” She also went down to the hardware store to complain, and I can easily imagine her conversation with the hardware store guy.

Of course it was not his job to question any kid who wanted a chain connected to eye screws. Though maybe I made him suspicious of hardware-seeking kids after that.

I remember thinking how easy it was to make a grown-up weapon, how permeable the membrane was between childhood and adulthood: a few bucks, hand tools and an afternoon. I taught myself to twirl the nunchuks fairly convincingly, I thought. There was skill involved, because once they get spinning it’s just as easy to thwack yourself in the head as someone else, or a lamp.

I’ve moved a dozen times since then, and they’ve always come with me. On one hand, I don’t really need nunchuks. But on the other hand, I’m proud that I made them myself, and you never know when they might come in handy.

See All Posts by Kevin Obsatz

Kevin Obsatz is a filmmaker, a writer and an artist based in Minneapolis. He teaches at the University of Minnesota and runs an experimental film and video screening series called Cellular Cinema.