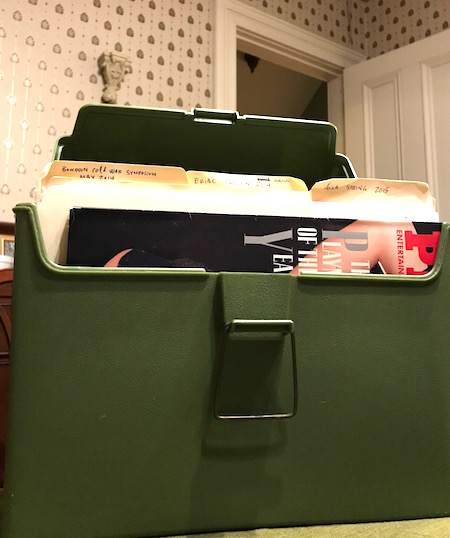 Last summer, at the end of my sabbatical, my car died on the drive from Michigan to Rhode Island. It died in a city where an ex-girlfriend lives. I’ll call her Minerva. She had settled there since our breakup a decade earlier. Now, both at turning points, biding farewell to youth, we briefly gave it one last shot — an experiment doomed to fail. Minerva was more professional, mature, and sure of her desires than I was. This had not changed since 2008.

Minerva lived in a not-great neighborhood, so I unloaded my junk into her living room. Then I bought a ticket to Michigan, where my dad’s friend had a car for sale. I would buy it, drive it back, and donate the dead one to NPR. It was a fine plan, except for one thing, a Playboy.

Therefore, in young adulthood, between girlfriends, I celebrated escaping adolescent powerlessness by buying a magazine now and then. You don’t have to do this often to amass, over the years, a real stash. By the time I dated Minerva, my twenties were ending. But the stash persisted. And, as we were breaking up, she stumbled across it. And she feigned good humor. But there was more shame and embarrassment than laughter as we made a purge.

So, last summer. NPR wanted the title to the car.

The title was in a box at the college I teach at, three states away. Next to the Playboy, if I remembered correctly. Unlike all those past magazines, this one I owned because it featured fiction by David Foster Wallace.

“In my office? I think? But what if I left the car where it is for now?”

“Let’s get it donated,” Minerva said. “Call the secretary. She’ll mail the title.”

“Moral turpitude” is grounds for dismissal according to my contract. The college is Catholic. The secretary got married as Kennedy was trying to dismantle Communism. I pictured her searching through my files and discovering Playmate of the Year 1988.

Alternatively, I pictured explaining all this to Minerva. Three generations of American men, with decreasing plausibility, had claimed they read Playboy for the articles. Plus, our history.

I called the secretary.

“If I don’t call back, I’ve found it,” she said cheerfully.

The Playmate, raising her arms, draws a black camisole upward across her breasts. Could I hear traces of this image in the secretary’s voice? I found out two weeks later. The Playboy was in a different box, with my coffee maker.

See All Posts by Eric Bennett

Eric Bennett is the author of Workshops of Empire and A Big Enough Lie. His writing has appeared in the New York Times, A Public Space, MFA vs. NYC, Public Books, VQR, the New Yorker online, and elsewhere.