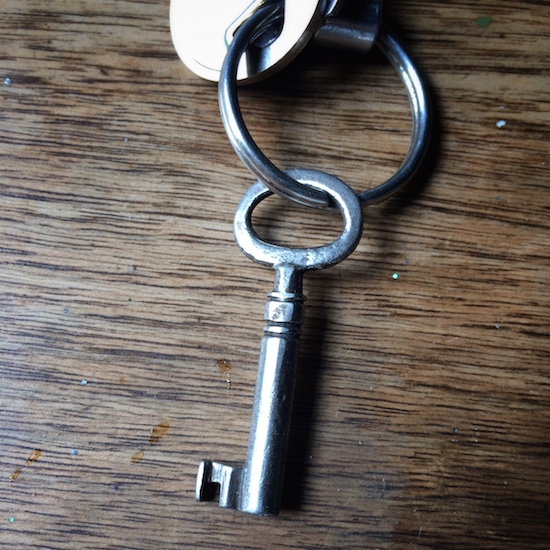 Since 1979 I’ve kept a small, antique skeleton key on my keychain among my more modern keys. The key opens a two-century old grandfather clock that I’m guessing still sits in a parlor on the second floor of the main building at Vassar College, from which I graduated in 1980. For reasons unremembered, I had signed up for a weekly adult education class in Poughkeepsie to learn antique clock repair. The eight-week intro class took us through the basics. During this time I ordered some special tools, the best of which were a set of clock keys with smooth, egg-like handles that allowed one to slowly release the wound-up springs that powered defective clocks. It was like letting air slowly out of a shaken bottle of soda.

After the intro semester I signed up for the advanced class. These weren’t exactly classes, but more like a club. One evening a week a dozen or so of us convened in the basement of the Poughkeepsie High School with milk crates full of tools and old clocks. We worked quietly at metal-topped tables until somebody started grumbling, whereupon the old hands wandered over and suggested remedies.

After reviving one sad junk store clock, I was seized by ambition and started eyeing the grandfather clock at the college. It was at least seven feet tall and gorgeous, and the people in the office down the hall told me it hadn’t worked in years. I asked for permission to fix it, and, was told, “sure” by people who I’m guessing had no authority to actually do so.

No one knew where the key to the clock case was, so I removed the hinges, extricated both movement and the lock mechanism and brought them to class. I muttered about finding a replacement key, and the next week someone brought two lunch pails filled with hundreds of old keys. “One of those will work,” he told me. Within a half-hour I’d found two working keys.

I cleaned and oiled the movement, then reinstalled it. I cranked up the heavy weights, pushed the pendulum, and the clocked ticked back to life. It continued to do so for the hour I sat there, and then I checked it daily for a week, and then after that I would stop by every weekend to wind it up again.

Repairing that clock gave me more satisfaction than my English literature, ancient Greek, or other classes. No paper I ever wrote felt finished, and I always thought my translations were incomplete and suspect. But the clock kept ticking, week in and week out, and I could sit in the parlor and read, listening to it beat every second and a half. It was like visiting a small and supremely peaceful island of competence and completion.

After I graduated I left one key behind with the people in the office down the hall, along with hand-written instructions for winding the clock. But I kept the other, and put it on my keychain. Ever since I’ve instinctively felt for it in my pocket once or twice a day.

See All Posts by Wayne Curtis

Wayne Curtis is the author of And a Bottle of Rum: A History of the New World in 10 Cocktails.