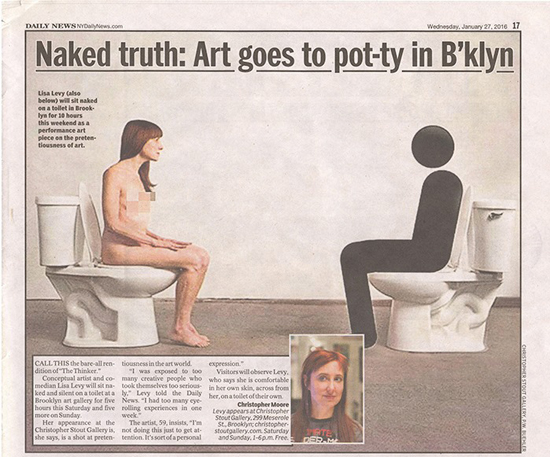 I came home angry from an exclusive/exclusionary self-congratulating art event where to me, the hypocritical self-consciousness of the attendees was palpable. The feeling of reckless abandon I had hoped to find at this event was nowhere to be found. Creativity in the air was specifically controlled and monitored. I will not describe the event further, mostly because there were recognizable names involved (nothing to do with Marina Abramovic though). I went to sleep. In the morning I woke up with a performance art idea that was the perfect expression of my feelings from the night before. I called subversive gallerist Christopher Stout. When I got off the phone, I knew in a few weeks I would be sitting naked on a toilet in the Stout Projects Gallery in Bushwick for my 3-day durational performance, “The Artist is Humbly Present.”

I was referencing Marina Abramovic’s seminal piece “The Artist Is Present” performed in 2010 at MoMA. I love Abramovic’s early work, but her sitting silently, motionless in a robe in the grand atrium of MoMA while people waited in line for hours to sit across from her, was the epitome of “the emperor has no clothes” in the artworld. It bothers me how contemporary art could be adding so much more to people’s lives if the art system was more interested in work that communicated to the public. Contemporary art, for my taste, is too oblique — it seemingly tries to elevate itself by being obtuse to the public in a self-important way. 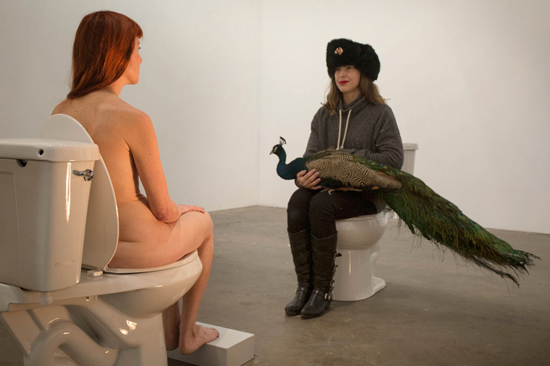 In “The Artist is Humbly Present,” I would be sitting naked, on a toilet, silent, as gallery visitors would be invited to sit on another toilet opposite me. People would be welcome to interact with me in any way, except for touching.

My husband, artist and photographer Phil Buehler, wasn’t crazy about this endeavor, but nevertheless was all in on making it happen. We purchased two Home Depot toilets. Phil took some great photos of the setup to announce the idea and we were ready to go.

It was an exciting 3 days. So many people showed up — strangers, friends. Humans of all sizes, styles, and ages — even a peacock! It was like being a fly on the wall. Completely exposed, but in a way invisible at the same time, silently observing people responding to me. A lot of people, sitting in silence, connected with me. Many saw it as a forum to express themselves as well. I remember a beautiful black woman sharing her experience with her young child. There were a few people who relished the opportunity to take their clothes off in public. A group formed watching the others sit with me. One of them started drawing portraits of me and my sitters. It was an invaluable experience to me in so many ways. 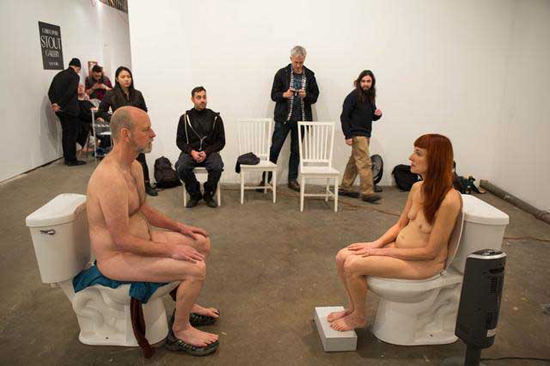 There was international press, and I was able to get my message out loud and clear. The Daily News headlined, “Artist Lisa Levy mocks pretentiousness by sitting naked on a toilet at a Brooklyn gallery”. Franceinfo concurred (you get the idea), “Lisa Levy se dit exaspérée par la ‘connerie’ du monde de l’art, grangréné selon elle ‘par l’ego et la prétention”. Cracked recently included me in their list of “15 Extreme Pieces of Performance Art”.

Ironically enough I found out later that the number one question Abramovic got about her performance was: “How did you pee?” 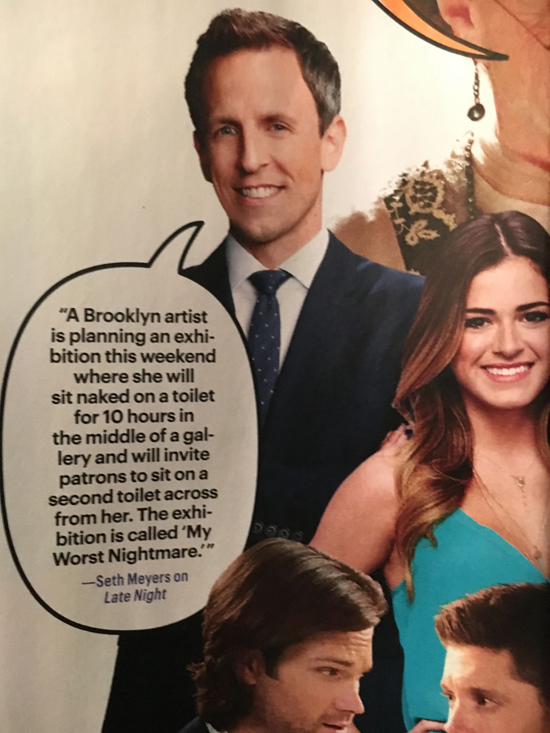 See All Posts by Lisa Levy

Lisa Levy is a conceptual artist, comedic performer and (self-proclaimed) psychotherapist. Her visual art has been widely exhibited at many venues including The New Museum, The Bronx Museum, SPRING/BREAK Art Fair, The Pulse Art Fair, The Brooklyn Academy of Music and numerous galleries. Her artist multiples are for sale at Printed Matter, Open Editions and Fuse Works. Levy’s work has been covered with feature stories in numerous publications such as The New York Times, The London Times, Time Out New York, The Daily News and The New York Post—as well as many other publications such as Artnet, Hyperallergic, and ARTNews. As a live performer, her most popular character is Dr. Lisa, the self-proclaimed psychotherapist. Currently, she hosts a weekly show on Radio Free Brooklyn, called “Dr. Lisa Gives a Sh*t”, where she conducts funny, emotionally revealing “psychotherapy sessions” with a wide range of creative guests. You can listen to her show live every Thursday 2-3pm on RadioFreeBrooklyn.org Lisa has performed at The Brooklyn Museum, The Brooklyn Academy of Music, Joe’s Pub and the Edinburgh Fringe Festival. Dr. Lisa has been the subject of feature stories in numerous publications such as The New York Times and The London Times. For her send-up of Marina Abramovic’s “The Artist Is Present”, which she titled “The Artist is Humbly Present”, Levy sat naked on a toilet for three days, garnering international attention.