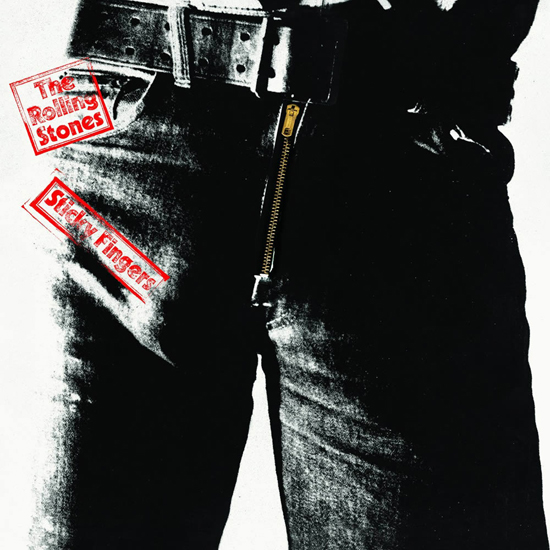 When I was a kid I saved up my babysitting cash to buy LPs. First up were Jimi Hendrix’s 1971 Cry of Love, and The Rolling Stones’ 1971 Sticky Fingers. The Stones’ cover featured a grainy black and white close shot on a man’s hips in tight jeans, wide belt, bulge at the crotch, and a real, working zipper you could pull right down. The inside sleeve debuted the fat red lips and lolling tongue which would become The Stones’ signature logo. Sticky fingers, crotch, tongue. It’s quite a package. One my parents disapproved of. The reigning hedonistic cry of the counter-culture — “sex, drugs & rock ’n’ roll” — terrified conservative America. I didn’t see the problem with it. A yank down on the zipper revealed… nothing really. The tighty-whities of underwear. The white of possibility. My parents confiscated the cover, but let me keep the record. The songs were salacious (“Brown Sugar”), druggy (“Sister Morphine”), and had a dreamy, sated weariness to them. I wanted to have so much experience that I, too, would be sated.

My young mind felt, more than understood, the injustice of censorship. In some ways it was a joke cover. The design was overt in signaling a sexual revolution. It seems so benign today. The cover was designed by Andy Warhol, with Craig Braun; the tongue logo by John Pasche. Warhol had already designed a “peelable” banana cover in 1967 for The Velvet Underground & Nico. The un-peelable underwear of the Stones’ cover sported Warhol’s gold signature logo. The underwear model was rumored to be Warhol’s lover. Warhol, openly gay, was in on the joke. The red ink stamps of the cover text implied “censored.” And censored it was, in Franco’s Spain, where the cover was replaced by a revolting image of a can of sticky fingers. A Russian version from 1992 switched out the bulge for a crotchless model, and added a Soviet hammer and sickle to the belt buckle.

The original cover, with the real zipper, was expensive to produce, damaged the vinyl record, and was eventually replaced with a zipless crotch. By that time Erica Jong had coined the phrase “zipless fuck” in her book Fear of Flying, a response to uptight America. “Zippers fell away like rose petals,” wrote Jong, “…underwear blew off in one breath like dandelion fluff.” 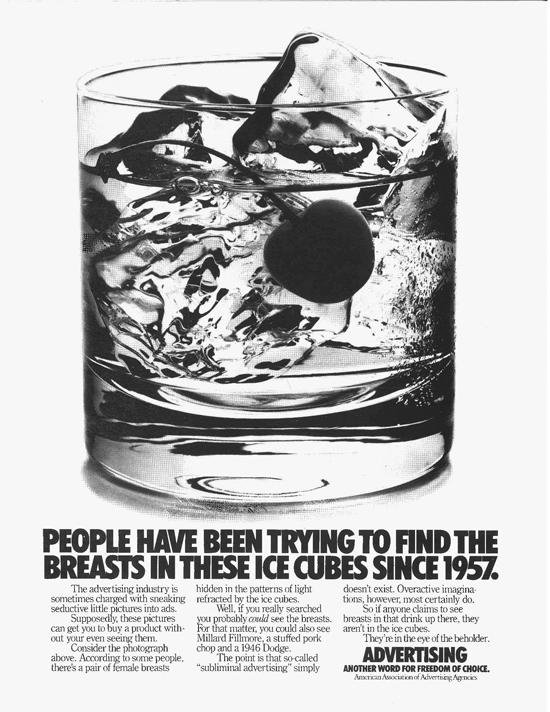 The Stones cover was certainly cocky, but at a time when implications of sex were commonly encoded into mainstream advertising, why did it inspire controversy? After all, it was honest and straightforward in its raunchy suggestiveness. The subliminal semiotics which now inform advertising was just a baby-science back then. Big Tobacco sold their death sticks with images of flirting couples and healthy sports, a duplicitous alignment which matched cigarettes with wholesomeness. Which notion is the obscenity?

In 1972 photographer Robert Frank went on the road with the Stones and shot intimate footage of their shenanigans. Cameras were passed around to anyone who felt like shooting. The film, titled after a deleted track on the album, Cocksucker Blues, is a casual, masterful tarnishing of the lusty sheen of the Stones. The swagger of Mick Jagger and pals veers into contortion, they look like promenading lizards as they preen, shoot up, toss groupies around, nod out. The film sucked the glam right out of sex, drugs & rock ’n’ roll. The record label suppressed the film, only to be seen in rare screenings or on a contraband VHS, sold in the street — the faded, grainy, over-copied bootleg only adding to the ghostly allure of the film.

The album was a mega-hit. The original zip cover package can be found on eBay for over a grand. Wish I still had mine. 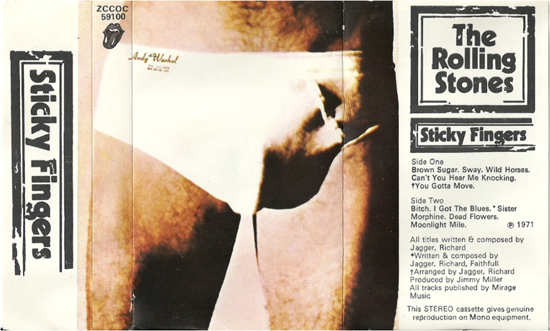 Images (top to bottom): Original vinyl album cover; period ad denying subliminal marketing in…ads; unfolded cover to a UK cassette version which, when seen on store shelves, left “Andy Warhol” as the only words on front or side.