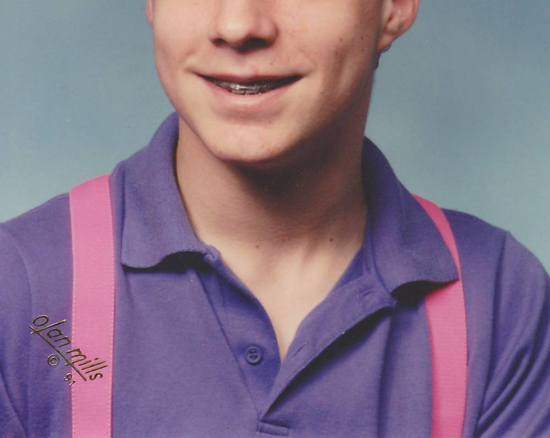 In eighth grade, suspenders were my sartorial trademark. I had two dozen pairs, from classic black to Mork-from-Ork rainbow. I was a hapless geek rebranding as a willful weirdo — there was eye-rolling, sure, but I was a fast talker, star of the school musical, and as close to popular as I’d ever been.

High school would be different. Two middle schools fed into ninth grade, meaning 150 new people blindsided by my quirks. Suspenders made me an easy target for adolescent rage, along with a simple method for expressing it: the snap. Few could resist the temptation to position themselves behind me, pull back on the X, and let go.

Not for the last time in my life, I endured through sheer persistence. I wore suspenders Every. Single. Day. For most people, it became part of the wallpaper — and that’s when the real nutjobs came out.

By far the worst were two metalhead meatballs I’ll call Shane and Mike — ostensible non-conformists driven to white-knuckled rage by my refusal to conform. One day, they staged a cafeteria scene in which each grabbed a strap and ran in opposite directions. I think they expected it to end in spectacular injury, but the suspenders just detached and left them hanging.

Months later, they tried again. They ambushed me in front of the school post-dismissal, this time pulling from the front, dragging me along on a kind of double leash. This got humiliating pretty quickly, so I decided to stop short and let them detach again. But the straps tore apart instead, and the boys ran off high-fiving as I unclipped the tattered remains and walked home clutching them in mourning.

Well, my mom saw this, and I made the mistake of naming the guys who did it. I didn’t realize she’d acted on it until Shane confronted me in a stairwell. He was by far the spookier of the two — Mike was a petulant brat, but Shane’s anger seemed to be fueled by poverty and unaddressed mental issues. He showed me a knife and said, “Thanks to your mom I’m on final probation. If one more thing happens, they’re kicking me out. And then I’m coming for you.”

But it got even scarier. A few weeks later, I was unlocking the door to my house after school when someone called out “Hey asshole!” Shane was on his bike in the street. “Now I know where you live!” he cackled before speeding off. This gave me pause — I had two little sisters, and this guy was clearly a psychopath. What was he capable of?

By then, I was mostly finished with suspenders anyway. I’d begun feeling pretty self-conscious — what had started as a gesture of plucky self-expression was beginning to feel silly and contrived. Maybe there were more sophisticated ways to gain attention — and not risk my life in the process. Shane must have approved, wherever he was — I assume he got expelled, because I never saw him again.

See All Posts by Jeff Lewonczyk

Jeff Lewonczyk is a recovering playwright and aspiring cartoonist who lives in Brooklyn. His children’s holiday comedy Bethlehem or Bust has been performed in schools across the country, and his illustrated travelogue I Went To India, and All I Brought You Were These Lousy Cartoons has been featured in publications ranging from Buzzfeed to the Hindustan Times. Visit his website here.