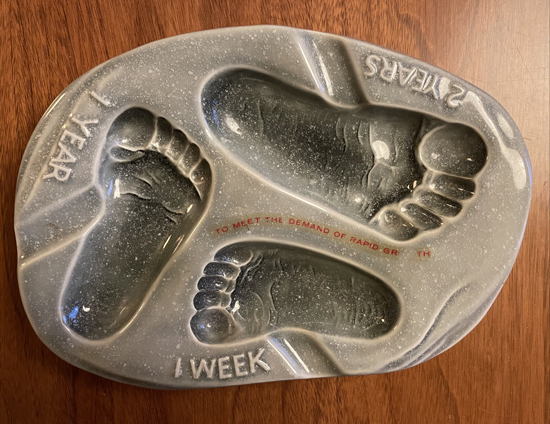 I bought it at a friend’s garage sale. Attracted at first by its mid-century amoeboid shape, I spent a few moments trying to puzzle out what I was looking at. There were deep and detailed depressions shaped like children’s feet, labeled “1 WEEK,” “1 YEAR,” and “2 YEARS.” Flip it over, and there’s a foot-shaped decal extolling, in all caps, “SOME RECENT ADVANCES IN PREVENTATIVE PEDIATRICS,” including the control of SCURVY, INFECTIOUS DIARRHEA, and RICKETS. Now, thanks to the advent of Similac with Iron, the DEPLETION OF IRON SUPPLIES in infancy had been conquered.

But what were those channels running from each footprint to the edge of the object? Could it be? Oh, yes, it was: An ashtray in which pediatricians were meant to stub out their cigarettes in children’s footprints, all as an advertisement for Similac baby formula. 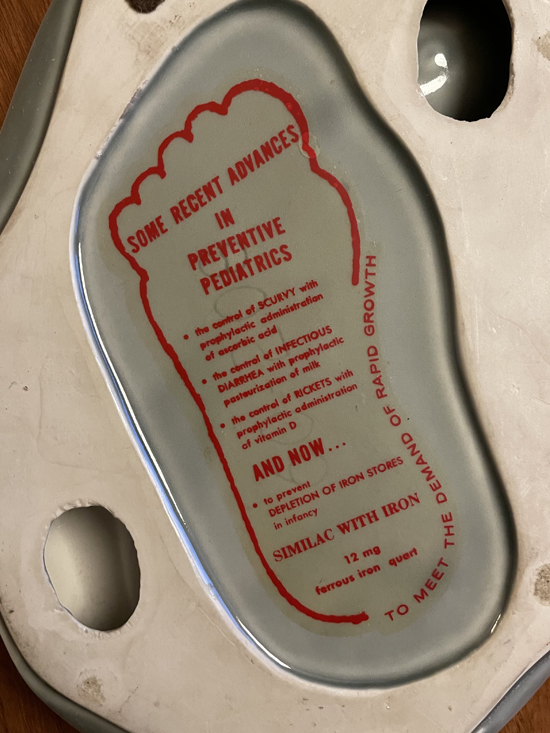 Similac dates to 1922, one of several new infant formulas to hit the market after attempts to create a powdered human milk failed. The name is a portmanteau of “similar” and “lactation.” These are easily ascertainable facts. Why someone thought an ashtray was a good way to promote baby formula to physicians is an unanswerable question, even for an era when doctors smoked at the office. Even I, a happily childless crone, find the idea of stubbing out a cigarette in a receptacle shaped like a baby’s foot rather transgressive. Even I, a happily childless crone, understand that baby feet are to stick in one’s mouth and nibble — and I don’t mean in a Hansel-and-Gretel amuse-bouche kind of way. (At this point in the narrative, I find it hard not to hear General Ripper in Dr. Strangelove, fulminating against fluoride and its alleged presence in a favorite confection: “Ice cream, Mandrake? Children’s ice cream?”) 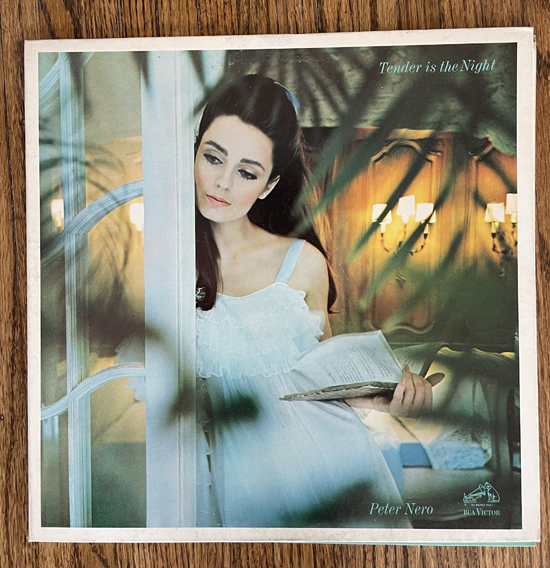 Nowadays, pharmaceutical advertising swag skews towards the pedestrian: pens and mugs or maybe a cute stuffed version of an anthropomorphized mucus blob. Back in the days of three-martini lunches and big advertising budgets, things were a bit more adventurous. I have a 1967 easy-listening LP that advertises Placidyl (a “sedative-hypnotic” prescribed for insomnia) with a nightgown-clad covergirl who, book in hand, gently rests her cheek against the window frame as she blankly stares outside. I can’t decide if this is meant to show she needs the drug or if she’s taken the drug. Placidyl also figured in a set of pinback buttons that mimicked both political (“Woodrow Wilson The Man of the Hour”) and protest (“Calm Down”) campaigns. They came pinned to a colorful card that read in part: “In times of choice you can rest assured with either candidate,” these being Placidyl and Nembutal (the latter was the barbiturate that killed Marilyn Monroe). Did I mention the buttons were produced in the cataclysmic election year of 1968? 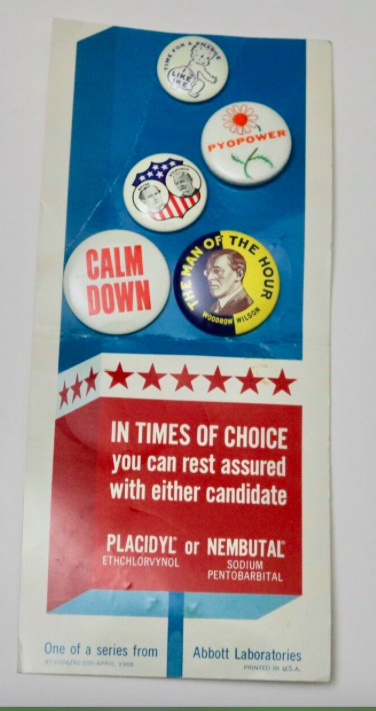 But even these items don’t have quite the shock value of my baby-foot ashtray. Perhaps the team assigned to Similac’s advertising was particularly bold — or clueless. Another piece of Similac swag is a tape measure. Printed on its side in a big, bold 1970s font are the words: “Plan for Infant Formula Profits.” It’s almost as if they said the quiet part out loud.